Jordan Spieth returned to the PGA Tour at the AT&T Byron Nelson on Thursday, shooting a great round of 9-under-par at TPC Craig Ranch. 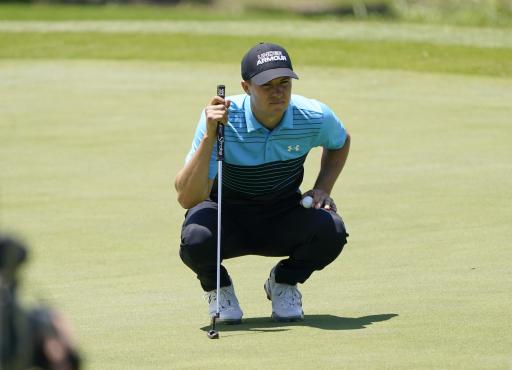 Jordan Spieth made his first appearance on the PGA Tour since The Masters, shooting 9-under-par on Thursday to share the lead at the AT&T Byron Nelson.

The 27-year-old, who won for the first time in four years at the Valero Texas Open in April, birdied the 12th and 13th holes before making a superb eagle on the final hole.

Finishing with authority!@JordanSpieth closes out with a 55-foot eagle on 18 for the co-lead. pic.twitter.com/RPYQH4kkoM

The 30-year-old has not enjoyed a good season in 2021, missing seven cuts of his last 11 events, but his bogey-free round with nine birdies provided a welcome return to form.

Rafael Cabrera-Bello, Aaron Wise and Doc Redman are one shot behind Spaun on 8-under-par, heading into the second round.

Sergio Garcia, who has missed six cuts in 14 events this season, enjoyed a better day on Thursday, firing a 7-under-par 65 to sit two shots off the lead.

The 2017 Masters champion made five birdies in his round and a fantastic eagle on the par-4 6th hole. Garcia only left himself with a 52-yard pitch to the hole and he hit it past the pin and spun it back into the cup.

Sam Burns, who picked up the first PGA Tour win of his career at the Valspar Championship, also shot a 65 to join the Spaniard in a tie for sixth.

NEXT PAGE: ROBERT MACINTYRE MAKES HIS MOVE ON DAY TWO AT THE BRITISH MASTERS