Play was suspended in Abi Dhabi again as Tyrrell Hatton moved to the top of the leaderboard. 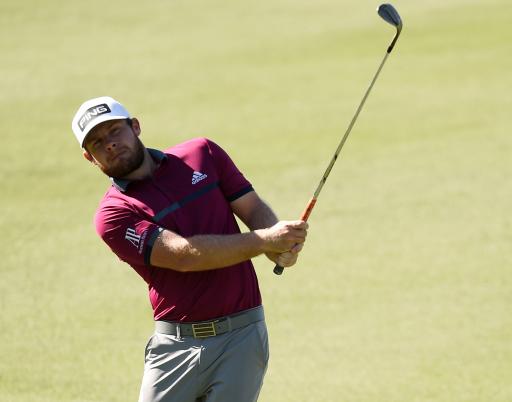 Play was suspended at the Abu Dhabi HSBC Championship for the second day running, due to lack of light, but that didn't stop Tyrrell Hatton producing a phenomenal display to take a 5-shot lead at the top of the leaderboard.

Hatton is 5-under par through 13 holes of his second round, which he will finish off tomorrow morning and the Englishman is currently 12-under for the tournament, with overnight leader Rory McIlroy dropping off the pace, shooting 1-over par through 14 holes.

After making two eagles in the opening round, Hatton made it three in 20 holes when he added another to his collection at the par-5 2nd hole.

WATCH HATTON ROLL IN HIS 3RD EAGLE OF THE TOURNAMENT BELOW:

"I'm obviously in a great position at the moment," Hatton said. "It was certainly tough out there, so I'm really happy to be five under. There was a couple of par putts toward the end of my round, so nice to hole them and keep a bit of momentum going."

Hatton's eagle at the 2nd was followed up with a bogey, but four birdies in a row starting at the 7th saw him take top spot, five clear of McIlroy, Romain Langasque, Jason Scrivener and Jazz Janewattananond.

McIlroy started his second round with a birdie at the first and after failing to take advantage of the par-5 next - which Hatton eagled - the Northern Irishman answered with his second birdie of the day at the third.

A bogey followed for McIlroy at the par-3 4th hole, followed by a double-bogey at the next after his ball found the trees off the tee, leaving a punch shot back into play his only option.

Tommy Fleetwood shot a bogey-free 5-under par round to share 6th place alongside a host of players, including fellow Englishman Matt Wallace, who will also need to finish his second round on Saturday.

NEXT PAGE: Matthew Wolff rides his luck at the 17th during American Express first round