Wolff and a number of other PGA Tour players got away with a lucky bounce at the testing par-3 17th during round one of The American Express. 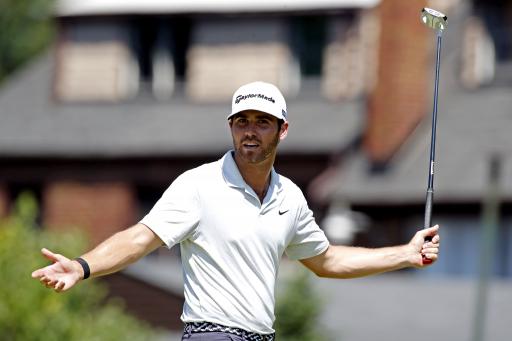 Golf is a game that requires a lot of skill and that's why the players on the PGA Tour are where they are today, but now and again you need a little bit of luck and that's exactly what Matthew Wolff and a few others got during the opening round of the American Express yesterday.

There's plenty of water to be found at PGA West in California and the 173-yard par-3 17th on the Stadium Course proved to be a challenging hole on Thursday, with many players finding the water surrounding the island green.

Some players though were able to breathe a huge sigh of relief after seeing their ball avoid a splash thanks to a little help from the rocks around the green.

Wolff, who shot a 1-under par opening round, stared his ball down as it leaked out to the right, but after a luck bounce he was able to walk away with a par.

WATCH THE LUCKY BREAKS AT THE 17TH HOLE ON THE STADIUM COURSE:

Brandon Hagy holds a one-shot lead heading into day two of The American Express, after posting an 8-under par round of 64 on the Nicklaus Tournament course.

Ben An is just one shot back on 7-under, whilst Tony Finau impressed with a brilliant run of birdies, but a few slip ups along the way have pegged him back to four strokes off the pace on 4-under par.

Joining Finau in T15 is 2018 Masters champion Patrick Reed and injury-free Brooks Koepka bogeyed his final hole of the day to settle for a level par opening round.