Are you PIN IN OR PIN OUT following the golf rule changes?

You no longer receive a penalty for hitting the pin when putting on the green, but do you still take it out of the hole? 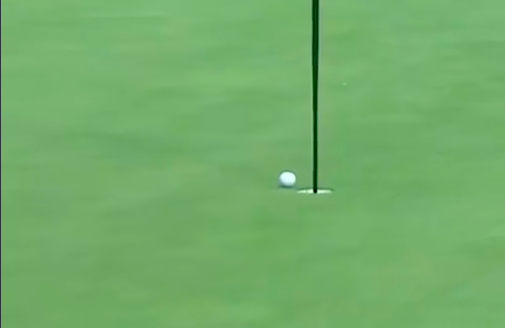 During the first round of the Senior Open Championship, Darren Clarke had a long-range putt that was tracking to the hole and looking to drop into the cup.

But the ball struck the pin and unfortunately for the eventual first-round leader, it stayed above ground. Although Clarke saw the funny side of it, the pin denied him a better score at Sunningdale.

This was a prime example of the potential weaknesses of this rule, but you could also argue that the pin can act as a saviour to your ball that could be rushing by the hole.

Before 2019 when the rules of golf changed, you were not allowed to hit the pin with your ball on the green, otherwise, it would result in a penalty.

Pin in or out debate. pic.twitter.com/NIYHfLeeJr

But now, you can keep it in the hole for any length of putt and you also have the option of taking it out or having the pin attended by your playing partner.

In my personal experiences, I feel that with the pin in the hole, the target that you are now aiming for looks smaller than it did before. I want the hole to look as inviting and as big as possible, so I will always take the pin out for short putts.

However, every golfer is different and by keeping the pin in the hole, this can offer reassurance and a buffer. If you have a short putt, you can use the pin to help stun your ball into the hole to prevent it from rolling past.

What is your opinion on the matter? Go over to our Facebook and Twitter pages and leave your comments, because this is definitely a debate worth having.