A badge of honour for DeChambeau, but does PGA Tour rule change END all our fun?

Bryson DeChambeau has yet to respond to the changes which will come into effect as of January next year. 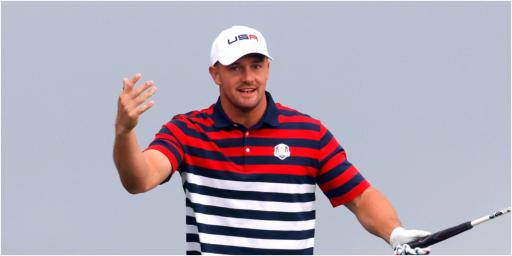 Somewhere Bryson DeChambeau must be smiling to himself.

Love him or loathe him he has changed the game, the way we think about it and his impact can be seen worldwide.

Kids turn up to their courses wearing flat caps, amateur golfers turn up to the driving range with the idea of swingspeed training firmly in their mind.

But there is a message from golf's governing bodies and that is: we're going to try and stop your fun. They have decided to try and rein in the biggest hitters with the introduction of a new rule to be implemented next January.

It is a local rule, not a universal one meaning that it will be up to individual tours and chiefs to decide to implement it and limit non-putters to 46 inches.

He's tied for the lead at the Arnold Palmer Invitational. pic.twitter.com/ud9bMc7zeF

When DeChambeau first rocked up on the PGA Tour he was skinny. Almost gaunt. Now he is a far cry from that physique. His workouts are incredible and his pursuit of speed, length and accuracy has been remarkable to watch even if you don't like him.

Bland banter with Brooks Koepka aside, he is special to watch.

His driving has been a massive feature and a draw for new viewers tuning in to watch the coverage for the first time and even he has experimented with 48-inch drivers.

Who can forget when he carried his tee shot 370 yards over water at the 2021 Arnold Palmer Invitational leaving him only 70 yards from the green.

Screaming after his ball and throwing his hands up in the air to the screams of the raucous crowd, this is surely great entertainment?

There will of course be a glass ceiling with DeChambeau. There are rules in place which mean he simply won't be able to keep on gaining more and more distance.

The trouble is we just don't know where that glass ceiling is and we want to find out. His critics may suggest this change of "Bryson proofing" courses as it has become known in golf circles will be welcomed by the player himself.

It will prevent his competitors from being able to bridge the gap to match his remarkable distances. "It's a little flattering in a sense because I did talk about that 48-inch driver for so long," he previously told the media.

Mickelson used his Callaway Epic Speed measured at 47.9 inches when he became the oldest winner of a golf major at Kiawah Island in May when he claimed the US PGA Championship.

He has been banging the drum about this issue since 2016 and in light of the news has compared the USGA to Forrest Gump. Stupid is as stupid does, he tweeted.

His issues are less about the issues with players hitting the ball greater distances but the rule changes will promote a shorter, more violent swing and will lead to injuries. Plus it makes the sport less fun, he has said.

Even Rory McIlroy is not happy. Not because he uses a driver longer than 46 inches, he prefers a smaller weapon - but because he thinks this whole issue has been a waste of time and money.

This is because golf's governing bodies spent millions on a '"distances insights" report but this cash could have been better used to put back into the grass roots of the game, he was quoted as saying.

According to the PGA Tour, since 1996 the average driving distance has increased from a 266-yard carry through to where it now stands at 296.2 yards. Think of how much equipment and technology has progessed since then.

This was first an issue in 2016 when the news first came to light about potential changes, but since that time the increase in distance is hardly big enough to warrant a massive curb such as this.

Justin Thomas spoke this week about how you only have to look at the number of players using the longer driver in their bag. It's not thay many. The PGA Tour has bigger problems to face up to, like turning their attention to the arm-lock putter.

To the purer golf fans they may not like seeing brawn players overpowering golf courses but there are other solutions avaialable. Move the tees back further? Set courses up to improve the elements of risk and reward?

At the most recent Masters DeChambeau talked about possibly using the longer length driver but then opted against it.

What is funny is that shaft length is only part of the reason for the increase in distance but not the whole story.

So stop trying to ruin our fun.

RELATED: HOW TO WATCH BROOKS KEOPKA VERSUS BRYSON DECHAMBEAU

NEXT PAGE: WHAT IS THE POINT OF THE PLAYER IMPACT PROGRAMME?