Bryson DeChambeau vs Brooks Koepka: How and when to watch The Match!

It is the match we have all been waiting for and it kicks off on November 26... 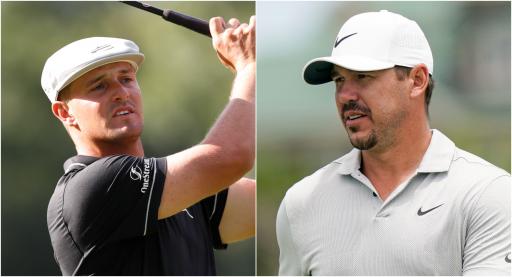 After the 2021 PGA Tour season, the last thing that we expected was to see a match between Bryson DeChambeau and Brooks Koepka.

Their feud completely dominated the golf world throughout last season. Once Koepka rolled his eyes in that infamous interview at Kiawah Island, there was no coming back.

After exchanging words on Twitter and DeChambeau's attempt to interrupt another Koepka interview at the US Open, it seemed abundantly clear that the two major champions did not like each other.

However, their relationship took a positive turn at the Ryder Cup. Team USA's crushing 19-9 victory over Europe at Whistling Straits provided common ground for the fiery duo.

RELATED: 'STUPID IS AS STUPID DOES': PHIL MICKELSON COMPARES USGA TO FORREST GUMP

At the end of the post-victory media session, DeChambeau and Koepka hugged it out and had a laugh. So now they have arranged to have a match. What was all the commotion for?

The showdown will be the fifth edition of The Match, a fixture that has become synonymous with the biggest stars from golf and other sports too.

Tiger Woods and Phil Mickelson have featured in the previous renewals, while figures such as Tom Brady, Peyton Manning and Steph Curry have also taken part.

The Match will take place on November 26, the day after Thanksgiving at The Wynn Golf Club in Las Vegas. Bizarrely, it will be played over 12 holes as opposed to 18.

RELATED: BRYSON DECHAMBEAU VS BROOKS KOEPKA CONFIRMED AS FIFTH EDITION OF THE MATCH

NEXT PAGE: PGA TOUR: HOW TO WATCH CJ CUP AND ROUND 1 AND ROUND 2 TEE TIMES