Hot vs Cold Golf Ball Test 2022 | These results surprised us

We recruited the help of a PGA pro to see if he could improve his scoring over nine holes with a hot ball versus a cold ball. 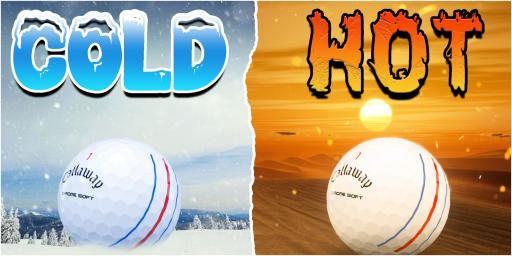 When it comes to hitting the ball longer, I will do absolutely anything.

Well, that’s not true. It’s an outright lie, in fact. I’m an extraordinarily lazy golfer and so I am willing to do the absolute bare minimum, especially in the winter, to try and gain an advantage.

Speed training? Weight lifting? Trying to emulate Bryson DeChambeau by watching his videos and thinking I will match his work ethic? Sod that. I’d rather moan about that missed putt for par.

Such is the testament to my laziness; I leave my clubs in the back of my boot more often than I can find a fairway. I’m reliably informed the colder temperatures will affect my equipment.

While that may be true and I am risking someone half-inching my clubs in the middle of the night, I just do not want the hassle of lugging my clubs all the way from my car to the garage.

I’d rather ensure that everything is ready to go when I finally convince myself to haul myself out of bed for that early tee time that invariably I will have wished I had given up after three holes.

Surely there must be a better and more proficient way of gaining an advantage? What about just ensuring every ball I hit is warmer, thereby giving myself an edge?

The golf balls I use when I rock up to a winter medal three minutes before my tee time are colder than the glances I get from other members incandescent with rage I have left it so late to turn up.

The first swing of the day – as we all know – is the toughest. There are so many aches and pains. I just want to make clean contact. I just want, at the bare minimum, not to make a double bogey.

With that said, would it actually make a difference if I used a hot golf ball versus a cold golf ball? It’s something that has been done time and again. The results show warm balls go a bit further.

Playing the other day twilight round, I paired up with a member who claimed to keep hand warmers in his pockets purely to keep his golf balls warm in the winter during competitions.

It gives me an edge, the nameless member explains in a convincing manner. Apparently, this nifty little trick will always ensure he gets over the ditch up the last. He’s also done his own stats.

I do not doubt the sincerity of said member. Yet I do believe they might be talking rubbish. Piping hot golf balls versus ice cold golf balls will surely have an effect? But just using handwarmers?

Testing this theory out on myself, at least in my mind, proves troublesome. I do believe that the closer in proximity to the hole I am the lower my chances of scoring will be.

The only issue is the consistency of my strike will be a little bit off to fully test out this theory. There are fats, thins, chunks and I’m pretty sure I discovered a new type of shank the other day.

So step forward PGA level one professional Seb Jones for this experiment. Nine holes, two golf balls. One in a bucket of ice and the other kept hotter than Tiger Woods’ Scotty Cameron Newport II.

More: Should the Callaway Rogue ST Max LS go in my bag?

Here is the data we got beforehand with the driver:

More: What you can learn from Tiger Woods' chipping technique

We are at Royal Ascot Golf Club. The temperature is 9 degrees and it’s on a Tuesday. We head out a little bit after 2pm when the course is clear. We can take our time with this and really focus on scoring.

No rushing. Complete focus. Will a professional player score better with a hot ball versus a cold ball? Let’s find out and see if it’s worth you keeping a few golf balls in your thermos flask instead of tea.

A nightmare hole to start. All of 229 yards (downhill), but still demanding of finding the middle of the club face to get that round off to a solid start. Jones fires the hot ball over the pin with his first shot and makes the putt for birdie. The cold one finds the edge of the green and we find a two-putt for par.

A gettable hole if there ever was one for someone who can carry the ball more than 270 yards. At an average of 288 carry from the launch monitor, this one shouldn’t pose a problem. Both balls find the fairway. From there, the cold ball found the green and we have an eagle putt. The other, about pin high right of the flag and we are left with an up and down for birdie. Two putts were safely navigated for the birdie using the cold ball. A par was made with the hot.

Again, this is a scoring hole for low handicappers. The hot ball was somehow lost in the cabbage left of the fairway. Frustrating, as it looked findable off the tee. From the drop zone, we scramble for bogey. The cold ball finds the fairway, and two putts were made for a safe par.

A drivable par-4 if there ever was one for the bombers. A bunker protects the green and there is out of bounds left. That being said, the hole calls for a tight draw with the miss right, although if you do bail out, you’re left with a treacherous pitch with a very slim chance of stopping the ball if you land it in the wrong spot. Both tee shots, with a 3-wood, ended up just shy of the green, leaving pitches up to the pin on the upper level. We made birdie with both balls. Onto the next.

Professionals vary between using irons for position here or just taking the corner on with the driver. If you do hit driver, getting on the green in two shots with a 3-wood or 3-iron is possible. We hit driver on both occasions. The cold ball finished up in the thick stuff and a position shot was necessary for the next stroke. We went for it in two with the hot. The long story short? We lipped out for par with the cold, and made birdie with the hot ball.

A tricky hole. No miss is good here, in truth. That being said, both tee shots found the green and two putts were made for safe pars. Time for the last three holes.

Driver can be used, though there is an environmental area that means you cannot miss left at all. Playing an iron for position is also tricky because you can be left with a long shot into the green as there is a ditch at 240 yards from the tee box. Driver was chosen and the hot ball found the fairway (just) and the cold ball, unfortunately, was about two yards into the environmental area. Par was made with the hot, and we dropped a shot with the cold.

Not as straightforward as you might think. In the winter, amateurs can find themselves hitting a hybrid but in the middle of summer can be hitting a 9-iron or even a wedge. Two pars were made with minimal fuss.

A ditch at around 280 yards from the back tees means driver is difficult to use, particularly if you don’t catch one and the wind is in your face. Today, 3-iron was selected. It’s getting a bit later, and a bit colder. And the breeze is picking up. The cold ball trickles into the fairway bunker, the hot manages to find the short stuff. We go from bunker to bunker with the cold, and lip out for par. A par was made with the hot ball, despite almost chipping in for an interesting finish.

There was clearly a difference in the distance the ball went. That much is true in the data we collected. Yet in terms of scoring it really made minimal difference.

Next page: Best drills using a headcover to improve your driving