Greenkeepers react after seeing thousands of beer cans thrown onto the 16th hole at TPC Scottsdale during the PGA Tour weekend action at the WM Phoenix Open. 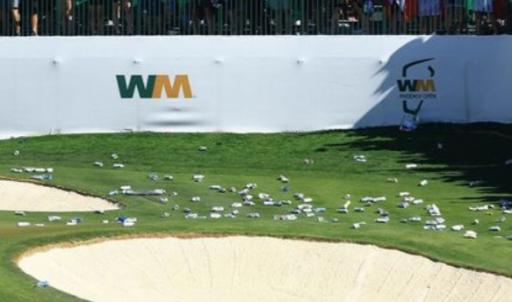 GolfMagic spoke to 10 greenkeepers from the BIGGA Facebook Group earlier today to get their take on the beer can mayhem that ensued on the 16th hole at the WM Phoenix Open over the weekend.

Sam Ryder and Carlos Ortiz both made aces on the iconic par-3 16th on Saturday and Sunday, marking the first time that two hole-in-ones had been made on the hole in the same tournament since Tiger Woods and Steve Stricker achieved the feat in 1997.

Celebrations ran wild after both shots, with beer cans being hurled onto the green and into the bunkers. Ortiz later revealed how he actually got struck by one of the cans after making his hole-in-one.

Harry Higgs and Joel Dahmen also had their own party on Sunday when making a couple of pars, taking off their shirts and giving it large to the crowd all while yet more beer cans were being thrown onto the green.

A bad look for the sport at large, or just one of those PGA Tour events where you just expect absolute chaos to happen?

The majority of greenkeepers we spoke to today, and a little to our surprise we must admit, were siding with the latter.

Check out their responses below, some of them certainly made us chuckle:

If it happened on my 16th hole, I’d be asking the club for a budget increase and pay rise if we had sold that much beer in the afternoon!

If it had happened on our 16th then it might have knocked out the local vandals damaging the green with their bikes!

That’s what happens when everyone gets drunk in the sun. Disgraceful, no need to do that on a golf course. Plus it’s £80 fine for each count of littering!

I actually don’t mind it. If you have all fans using plastic cups to minimise damage, I think it will bring more people into our sport and get more people watching. Think it will help players interact with fans more as well.

It’s one hole on one golf course at one tournament and the players and spectators all seemed to enjoy it. As long as no one gets hurt, there’s no real damage and it’s more of a novelty than the norm, let’s just all chill out and not take ourselves so seriously. Well done to the team for quick clean ups.

Granted it’s not for everyone but I think it makes great viewing, which I think attracts some to golf who previously were not. The greenkeepers are probably not that bothered as it’s more than likely other volunteers at that tournament are on the clear up. I get it’s not traditional and far from normal rules of etiquette, but we can’t attract non-golfers to take up the sport and expect them to have the knowledge of seasoned golfers on this subject.

RELATED: SILLY SEASON IN PHOENIX? NOTHING HAS CHANGED SINCE TIGER'S ACE | OPINION

It’s great to see fans enjoying themselves, it’s a bit like the darts at Alexandra Palace. It has to be good for the game and encouraging youngsters to get more excited about it.

This is the one hole at one tournament in the whole golfing calendar where the Happy Gilmore-type of spectator is expected. The golfers enjoy it, the fans enjoy it, the staff are laughing while it happens. You expect it at the Waste Management, but if it was a par-3 at The Open there’d be uproar.

Brilliant! Golf needs to drop its dreary demeanour! The cans were collected and recycled, no one was hurt, any can marks will repair in no time, where’s the harm?

For more information about the British and International Golf Greenkeepers Association, please visit their website.

What did you make of the beer can mayhem at the WM Phoenix Open? Share your thoughts and comments over on the GolfMagic social media channels.