Sahith Theegala will be playing at Riviera after getting a sponsor exemption following his performance at the WM Phoenix Open. 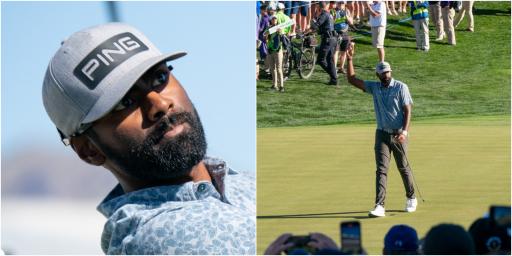 Sahith Theegala will be a sponsor exemption again this week at Tiger Woods' Genesis Invitational at Riviera.

Theegala fell cruelly short of victory at the WM Phoenix Open after seeing his tee shot find the water at 17 at TPC Scottsdale.

It led to the 24-year-old giving a tearful interview immediately after he received a standing ovation at the 18th hole.

While it is too soon to suggest a star is born, Theegala showed that he could compete with the best players on the PGA Tour.

He was tied with Patrick Cantlay for the lead at 16 and then drove the green at 17. The only problem was the ball didn't stop. Pain.

In the end, it was Scottie Scheffler who finally stepped into the winners' circle with a playoff victory over Cantlay.

Sahith Theegala will be a sponsor's exemption again this coming week at the Genesis Invitational.

Theegala spoke of the magnitude of playing alongside Brooks Koepka and Xander Schauffele.

By the time he finished up on Sunday, the crowd were chanting Thee-ga-la Thee-ga-la.

Jon Rahm is the favourite to win at Riveria. He finished in the top 10 last week but was frustrated by his poor putting.