Silly season in Phoenix? Nothing has changed since Tiger's ace | Opinion

The scenes at the 16th hole at TPC Scottsdale divided golf fans, but has anything really changed? 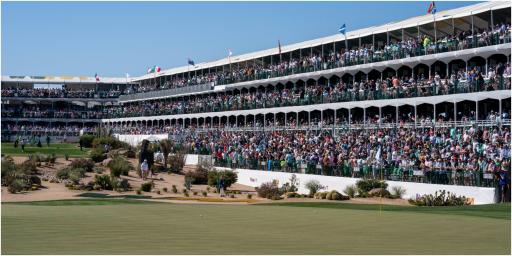 Not my words, but those of the commentator 25 years ago when Tiger Woods made his famous hole-in-one at the Phoenix Open.

Woods memorably gave us a celebration that now looks a little bit awkward with his raise the roof fist pumps.

"That was the thing back in the day," Woods said when asked what he remembered about that infamous moment back in 1997.

They're gonna go nuts when he hits this thing.

As he strolled down the fairway at TPC Scottsdale, it was pandemonium behind him. Beer flew everywhere. The tee box was drenched.

Last week in Phoenix, we saw similar scenes when not one but two aces were made. It was absolute carnage.

First there was Sam Ryder, then there was Carlos Ortiz. Play was suspended as staff had to clean up the beer cans.

Those scenes completely divided the golf world. Some suggested it had no place on the PGA Tour, others embraced it.

"Silly season", some people barked while others encouraged players like Harry Higgs to take his shirt off and prance about.

Brandel Chamblee touched on this in the Golf Channel broadcast, picking up on the now tired phrase "growing the game".

Growing the game is not about giving already rich golfers more blood money from Saudi Arabia, he explained.

But embracing things like a cap backwards, or players getting into the spirit of things at the famous 16th.

Watching Sahith Theegala hype up the crowd on 16 - in the middle of contending for his first PGA Tour win - was incredible.

Golf needs to move on a bit from the stuffy times of the past.

This is once a year. Once a year do we have an event with its own party identity.

The scenes were exactly the same in 1997 and they were no different in 2022. You know what to expect here. It is no surprise.

Perhaps, if there was one thing that soured was players being struck by the flying beer cups. That needs to stop.

Ortiz claimed he was struck in the back but didn't seem too bothered by it.

That did overstep the mark. If fans were deliberately throwing objects towards players then they need to be taken out.

You can just hear Peter Allis' voice explaining how there are a "few villages missing their idiots".

It was also frustrating watching more plastic cups fly onto the green as the staff attempted to clear the green and bunker at the 16th.

"Time to move on from silly season", some fans commented on social channels.

Of course, there is an element to that. And I do agree there were some things that were wrong.

But nothing has really changed.