"That guy did not want to play golf": Carlos Ortiz says of PGA Tour winner

Carlos Ortiz, who got a hole-in-one at the WM Phoenix Open, told an interesting story about one PGA Tour winner he went to college with. 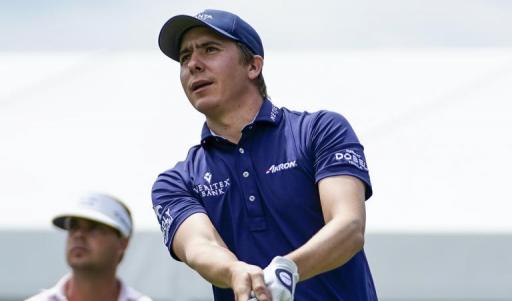 PGA Tour players Carlos Ortiz and Sebastian Muñoz both are alumni of the same college, but it appears only one was interested in taking golf seriously.

The 30-year-old Mexican hit the headlines over the weekend by becoming the second player to get a hole-in-one at the WM Phoenix Open.

He sent a towering tee shot straight at the pin at the 16th hole in front of 20,000 fans. The ball landed softly and rolled in at the perfect pace.

The United States' Sam Ryder sent the crowd into similar pandemonium only the day before with his sublime ace that spun in.

Ordinarily, you would think all players on the PGA Tour have always had huge aspirations to get to the elite level.

Hours upon hours of grafting on the range and hitting balls well into the night. Not for Muñoz, though.

"That guy did not want to play golf for a living," Ortiz told the podcast. "He went there for the college experience and he said, 'look guys I'm here, I'm not going to play golf, I'm just here to have fun."

Ortiz said he could tell Muñoz was talented and that he was the third best player on their side at North Texas.

"So the year I decide to leave college he decides, 'okay I'm going to try it', y'know, he says because he saw me having success," Ortiz said.

"He never played in the team with me. He wanted to have fun."

He's turned into a hell of a player, Stoltz says.

Muñoz, 29, won his maiden PGA Tour victory at the 2019 Sanderson Farms Championship with a playoff victory over Sungae Im.

Ortiz won three times on the Korn Ferry Tour. He was that tour's player of the year in 2014.

His only PGA Tour victory to date came at the 2020 Houston Open.