Patrick Reed is among a number of grinning participants at the Saudi International this week. This answer, in my view, was deserving of an award. 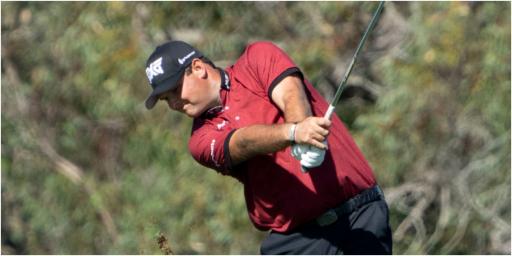 Patrick Reed was one of a number of high-profile players who fronted the media this week to talk of their joy playing in Saudi Arabia.

And it appears that every single player was in the same PR meeting being drip-fed some lines to try and justify their choices.

Of course, by this time you will have heard how each willing participant is there to "grow the game" and how they are not politicians.

But Reed's answer to the question of how he felt seeing this sort of investment in the Asian Tour was just superb. Deserving of a chef's kiss.

Let's take a look at what the new PXG staffer, current world number 25 and Masters champion had to say.

"That's my goal in playing worldwide and playing in these tournaments is to help try to grow the game around the world, and to see it growing in such a short period of time over here is amazing.

"You know, it's huge. To be able to grow golf everywhere and to see the support around the world with golf is what it's all about. Our job obviously out here is to play the best golf we can, to provide for our families and everything, but it's also our job as golfers and as a brand to help grow the game and for the next generation and for generations after that.

"To see just the minor changes here and there that really help the overall picture is amazing. To have Asian Tour be here and playing and to see it be their largest purse, hopefully that just is a domino effect for their events going forward that it just helps grow the game and helps also the players on that Tour and build hopefully a bigger and better Tour."

Five times Reed mentioned this, in my opinion, now ridiculous phrase. I just have a vision of someone standing in front of a white board pointing at the phrase "grow the game" written on it in black ink. One more time, say it after me.

This is not a slant at Reed alone. Lee Westwood, Cameron Smith, Dustin Johnson, Phil Mickelson and Marc Leishman all spoke at length at press conferences and ignored the noise.

Xander Schauffele also spoke of his passion for inspiring children back home to play the game.

There are several others playing there this week. In fact, 21 of the world's top 50 have decided to accept offers to play.

They're not politicians, they tell us.

Westwood opted for a different approach when asked about his perception of Saudi Arabia.

The European Tour legend said: "I didn't really know what to expect. I had asked a few people, but I was first in Dubai in 1994 when there wasn't a lot going on outside the city there, and once again in Qatar in 1997 I think it was the first tournament there.

"Very similar. And Saudi is in that kind of situation, just developing infrastructure, and going into the leisure section, I suppose, if you want to call it that, building more golf courses, kind of westernizing itself slightly, and I just expected it to be at that stage, and it is. It's developing."

Of course, there is an element of selective outrage here. But these players certainly should not be exempt from criticism.

One thing in my mind is clear, though: Every single player trotted out to face the questions in Saudi Arabia was certainly paying attention in their PR class.