Phil Mickelson launched an extraordinary broadside against the PGA Tour speaking ahead of the Saudi International. 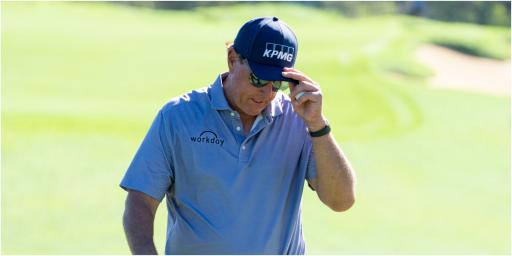 It would be unfair to suggest Phil Mickelson is in the twilight of his career.

After all, he became the oldest player to win a major at Kiawah Island last summer, so he can still mix it with the big boys.

While that win didn't force his hand, there were a number of opportunities available to Mickelson.

He could ride off into the sunset and play a more part-time schedule, or head to the PGA Tour Champions to try and topple Bernhard Langer.

Or, as we well know, he could up sticks and head over to something completely different and join a new golf league.

And it seems like his current mindset will ruffle some feathers. He knows as much, and appears to make no apologies for it.

Speaking ahead of the Saudi International, Mickelson launched into an extraordinary broadside against the PGA Tour bossess.

Mickelson, 51, spoke to the media in a group press conference beforehand and spoke about a few subjects.

With respect to everyone's favourite Lefty, those subjects were in my opinion a little tedious.

He spoke about Saudi investment in golf, the facilities and what the general infrastructure looks like in the Kingdom right now.

Mickelson also fielded a very interesting question from a journalist about the 25-year anniversary of Tiger Woods' first Masters win.

But a short time later Mickelson went into further detail in an interview with Golf Digest, and that's where things really got juicy.

"It's not public knowledge, all that goes on. But the players don't have access to their own media. If the tour wanted to end any threat, they could just hand back the media rights to the players. But they would rather throw $25 million here and $40 million there than give back the roughly $20 billion in digital assets they control. Or give up access to the $50-plus million they make every year on their own media channel.

"There are many issues, but that is one of the biggest. For me personally, it's not enough that they are sitting on hundreds of millions of digital moments. They also have access to my shots, access I do not have. They also charge companies to use shots I have hit. And when I did ‘The Match’—there have been five of them—the tour forced me to pay them $1 million each time. For my own media rights. That type of greed is, to me, beyond obnoxious."

Well tell us how you really feel. Mickelson went onto explain that his ultimate loyalty is to the game of golf and he is "appreciative" of where it has taken him.

He told the publication that he doesn't know how this is going to play out or what is going to happen or where things are headed.

"But I know that I will be criticised," he told them, explaining that this is one of the most intricate issues in sports.

He added: "The media rights are but a small fraction of everything else. And it is the tour's obnoxious greed that has really opened the door for opportunities elsewhere."

Mickelson also spoke about the Netflix documentary that is being filmed. He said that "none of the players are getting paid" but "the tour is getting paid a lot of money."

"Why hasn't golf had cameras and microphones on players and caddies?" he queried. "Because the players would not benefit, only the tour."

Mickelson departed the interview with what seems a pretty clear message, explaining "the tour only understands leverage."

"And now the players are getting some of that. So things are changing and will continue to change. I just hope the leverage doesn’t go away. If it does, we'll be back to the status quo."