From throwing Ryder Cup captains under the bus to being on the wrong side of the law: here are six of Phil Mickelson's biggest controversies. 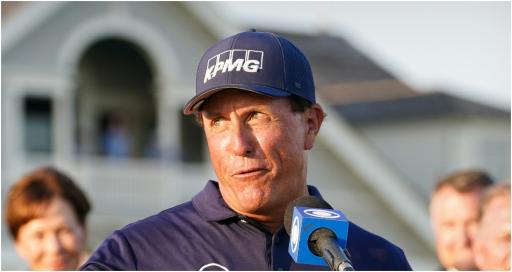 Phil Mickelson is currently at the very beginning of his self-imposed exile from the sport of golf.

How, where, when and if Mickelson returns are reasonable questions at this point as his sponsors seek to distance themselves from Lefty.

Mickelson, if you weren't aware, has faced a barrage of criticism after comments he made about creating leverage against the PGA Tour.

It appeared Mickelson was happy to overlook Saudi Arabia's human rights abuses as it was an opportunity to re-shape the tour forever.

He has apologised, but even that drew consternation from some. Critics argued he was trying to play the victim. Some sympathised.

Mickelson's illustrious career has been exhilarating and he has never been too far away from controversy.

Here are six of his biggest misdemeanours:

In 2018, Mickelson caused a bit of a stir ahead of his showdown with Tiger Woods.

In a promotional image, Mickelson gleefully posed with a huge pile of cash sat in front of him.

In 2004, the United States got thumped at the Ryder Cup at Oakland Hills Country Club.

Mickelson absolutely did not hold back after a nine-point loss.

He said: "It all starts with the captain. That put us in a position to fail and we failed monumentally, absolutely."

Talk about kicking a man when he is down.

#3 - Throwing Tom Watson under the bus

In 2016, Mickelson was critical of his captain Tom Watson.

But this time, the fallout was a bit bigger. This was perhaps because captain Watson was in the same room.

Mickelson said: "Unfortunately, we have strayed from a winning formula in 2008 for the last three Ryder Cups, and we need to consider maybe getting back to that formula that helped us play our best."

Even the winning captain, Paul McGinley, thought it was ill-judged for Lefty to be bringing that up in the immediate aftermath.

Phil Mickelson just did something you do if you're four years old and playing mini golf for the first time. pic.twitter.com/k0AxplqdMg

Mickelson appeared to let the frustration of the fast greens get the better of him at the 2018 U.S. Open at Shinnecock Hills.

Lefty decided to chase after an 18-foot bogey putt that was likely to roll off the green at the 13th hole and hit it again before it stopped.

He was not disqualified, though his actions raised eyebrows. Mickelson claimed he was taking advantage of the rules.

His playing partner, Andrew Johnston, broke down in hysterics, later telling the media: "It was one of the funniest things I've ever seen."

Mickelson later admitted that dissing his Ryder Cup captains Sutton and Watson, plus hitting the moving golf ball were among his chief regrets in his career.

Mickelson had to pay the authorities $1million plus the profits he made via being the beneficiary of insider trading.

The government had no proof that Mickelson intended to violate the laws against insider trading.

But the SEC named Mickelson as a "relief defendant" in a civil case, meaning that the agency believed that he profited from insider trading in Dean Foods, even if he didn't engage in it himself.

Mickelson's friend, the gambler Billy Walters, was charged, convicted and subsequently jailed after receiving a tip-off about the stock in July 2012.

Mickelson paid back the money in 2016, plus the profits.

"Phil understands and deeply respects the high professional and ethical standards that the companies he represents expect of Phil," he said in statement.

"He regrets any appearance that, on this occasion, he fell short. He takes full responsibility for the decisions and associations that led him to becoming part of this investigation."

Mickelson gave his sponsors the opportunity to pause or end their association with him after comments he made to the biographer Alan Shipnuck about his involvement with the Saudis.

"They're scary motherf**kers to get involved with," he told Shipnuck. "We know they killed Khashoggi and have a horrible record on human rights. They execute people over there for being gay.

"Knowing all of this, why would I even consider it? Because this is a once-in-a-lifetime opportunity to reshape how the PGA Tour operates. They've been able to get by with manipulative, coercive, strong-arm tactics because we, the players, had no recourse."

He claimed these comments were said "off record". Shipnuck denies this. The fallout has been extreme.

Even Rory McIlroy went after Lefty and said: "I don't want to kick someone while he's down, obviously, but I thought they were naive, selfish, egotistical, ignorant (words)."

Mickelson apologised and said his comments were "reckless" before announcing a break from the game to be "the man I want to be".

This time, his reputation might be damaged beyond repair.