Harry Higgs showed us more than we needed to see at the WM Phoenix Open. Is a fad now developing? 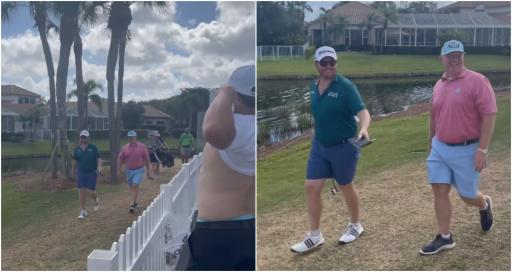 Now, it appears to be becoming something of a fad. And boy oh boy does Higgs regret his actions, even if he did get Nelly Korda's autograph.

Higgs is now facing a possible fine from the PGA Tour over his shirtless antics with Joel Dahmen at TPC Scottsdale a few weeks ago.

Apparently, his conduct was not acceptable as fans lobbed beer cans onto the green to encourage him at the famous par-3 16th stadium hole.

For some, it has left a sour taste in the mouth. The PGA Tour were happy to share his celebration on social media, now they might fine him.

Well, Higgs at least appears to be taking it all in his stride. He has regrets over doing it and has pledged to never do it ever again.

Also, the 30-year-old has also said he will be making a donation to charity too.

At the Honda Classic, Higgs went 71-76 to miss the cut. But he did have one interaction with a fan that made him chuckle.

One fan lifts up his shirt and bears all and Higgs can only respond with a grin: "See there, that's why I didn't wanna do it. Right there."