A trip down memory lane: 5 of the most ICONIC player/caddie partnerships ever

In the wake of Jim "Bones" Mackay's return - who are some of the most memorable duos of all time? 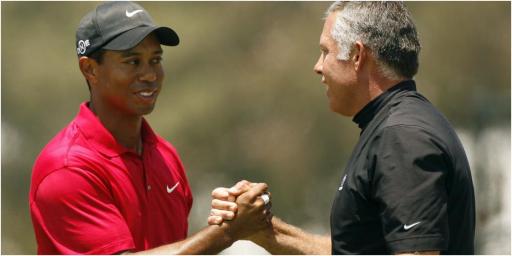 An iconic caddie is hanging up his broadcast microphone and is returning full time to the PGA Tour.

Jim "Bones" Mackay spent 15 years on the bag carrying for Phil Mickelson in one of the most iconic partnerships in the modern era.

Yes, there is also Tiger Woods and Steve Williams, but Bones has been such a familiar face for such a long time.

He took a break and has become pretty much the voice of the PGA Tour over the last four years with his insights inside the ropes.

The role of a caddie cannot be understated as many players have attested to over the years.

Rory McIlroy spent nine years with his first caddie and now he has his best mate on the bag. That hasn't worked out too badly.

There have been bustups and reconciliations - too many to list here.

But what about other iconic partnerships on the course?

GolfMagic decided to take a trip down memory lane and pick out five of the most iconic.

Sunesson was one of the first female caddies on the European Tour in the 1980s, but she wasn't always Faldo's carrier. She linked up with Sir Nick in 1989. A year later Faldo retained his Masters title and then won the Open. The pair went on to win two more majors together. After Faldo retired, Sunesson had stints on the bag for Fred Funk and Notah Begay III. Sunesson retired but then decided to hop on the bag in 2018 for Adam Scott at the Open, while a year later she caddied for Henrik Stenson at the Masters. Sunesson could regularly be heard telling off spectators for being too loud. "Stand still please" was regularly heard as Faldo took his address.

Unless you were born after Jack's time this man was probably one of the most recognisable caddies of all time. A tall man with a grey afro not too dissimilar too Mike Tyson's legendary boxing promoter Don King. The pair spent 20 years together and Argea carried during 44 of the Golden Bear's 73 victories. Nicklaus has been quoted as saying Argea did not give out yardages or club advice or even reading greens. That was Jack's job. Argea was inducted into the Caddie Hall of Fame in 1999 shortly before his death.

RELATED: WHY DID JUSTIN THOMAS SPLIT WITH HIS CADDIE?

"That's Tiger Woods – he does things no-one else could dream of doing."

Who can forget the moment Woods won the Open after the death of his father and embraced Williams. It was a short hug, but then something happened. And Tiger just went. He balled his eyes out. One of the rare occasions where we have seen emotion burst through his steely demenour. Williams wasn't Tiger's first caddie - that was Mike "Fluff" Cowan who carried at the 1997 Masters. Cowan was given his marching orders after he told a magazine how much he was earning. Williams was on the bag for Ray Floyd when he was contacted by Tiger's then-coach Butch Harmon. A short meeting ensued with a 23-year-old big cat and the rest is history. Together, they won 13 majors. Woods dumped Williams in the aftermath of his adultery scandal. Now Williams caddies for Adam Scott. What was the best moment these two had? Too many to name. One that stands out is when Woods was injured at the 2008 US Open. Williams wanted to call it a day as he feared Tiger was risking his career. Tiger's response? "F*** you Stevie, I'm winning this tournament".

Bones began carrying for Lefty during his rookie season. They enjoyed a 25-year partnership together. It was actually Fred Couples who gave Jim the nickname. Mickelson and Mackay were together for 41 PGA Tour victories, five major wins and his 11 consecutive Ryder Cups. The pair parted ways by mutual agreement. Then Mickelson hired his brother Tim to carry.

Tom Watson and Alfie Fyles in 1975 - Alfie was on Watson's bag for all 5 of his Open victories AND when Tom should have won in 2009. pic.twitter.com/j2nr2chAVx

Watson's caddie from 1973 until 1999 was Bruce Edwards before ALS took his life at the horribly early age of 49 years old. Watson had won two Masters titles back in the days when they were not allowed their own caddies. Edwards carried for Watson for his 1978 PGA Championship win and his victory at the 1982 US Open. Fyles carried for Watson's five Open victories and documented his life in the book called "Fore".