Why it's time to finally show some respect to Bryson DeChambeau

DeChambeau's demolition display at the US Open proves there's method in his madness... 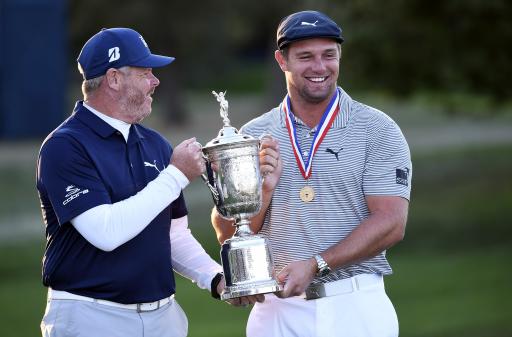 It was one of the greatest final round performances in US Open history, yet for some reason there are some journalists and golf fans out there that still want to find ways to put Bryson DeChambeau down.

"Stop talking up DeChambeau as a 'scientist' or 'engineer'," tweeted one freelance golf journalist. "He's a borderline-Asperger's college dropout."

Stop talking up DeChambeau as a "scientist" or "engineer". He's a borderline-Asperger's college dropout.

I mean, if that's all someone in the media wants to take away from DeChambeau's emphatic six-stroke victory at Winged Foot, then all I can say is they cannot particularly enjoy golf that much.

Personally, I loved every minute of Bryson's performance on Sunday as he delivered on his game plan and executed it to perfection.

BRYSON: "I WANT TO DRIVE THE GREENS EVERY WEEK"

I'm not going to list the rest of the negative comments I've seen about DeChambeau since his US Open victory, but get yourself on social media and you will find loads more damning tweets about him, and it honestly infuriates me.

Why does there need to be so much hate in the world? Why are some people so quick to bash hard work and resulting success? Is it jealousy, or did they just forget to cash out on Matthew Wolff?

Don't get me wrong, Bryson has at times played painfully slow golf over the years and has accumulated some detractors for that, but he is definitely improving in this department of the game and I applaud him for that.

As for claiming he's not a "scientist", what complete nonsense. The 27-year-old with a physics degree has applied science into everything he has ever done on the golf course, and that will always be the case.

"So many times I relied on science, and it worked every single time," said DeChambeau in his US Open victory speech.

DeChambeau took a calculated risk during the coronavirus lockdown by transforming his body and adding 40 pounds in weight gain.

Extra work in the gym and seven protein shakes a day (apparently) later, and DeChambeau is now hitting 350-yard bombs for fun with a clubhead speed reaching 140mph and ball speed notching 200mph.

The risk has more than paid off with two victories on the PGA Tour since golf's return in June, highlighted by a first major title at the US Open and progressing up to fifth in the Official World Golf Rankings as things stand.

WATCH: THE NUMBERS BEHIND BRYSON'S US OPEN VICTORY

From the word go at Winged Foot, DeChambeau told the media what he planned to do and that was to bash his Cobra driver everywhere and give himself as many short irons into the greens as possible, even if that meant playing from the rough.

DeChambeau knew that with his steeper angle of attack into the ball with his heavily upright irons and wedges, he would still have an advantage on his peers from the deep stuff as he would be able to dig his ball out of there much easier.

With the course playing hard and fast, it played into Bryson's hands. But it wasn't just all about 'Bomb and Gouge'. Far from it.

DeChambeau was near flawless on the greens, particularly on Sunday when holing out numerous clutch par saves from inside of 10 feet, on top of dropping a bomb for eagle at the par-5 9th.

The American's remarked improvement with the putter, progressing in strokes-gained putting from 145th in 2017 to 10th in 2020, is now an area of the game that his coach Mike Schy believes deserves just as much credit as his driving distance.

In fact, Schy even considers Bryson the best putter in the world right now.

"He owned that putter and I knew once he owned that it was only a matter of time that he would become a great putter," Schy told BBC World Service.

"I hope people don't look past that. To win a major you have to be a great putter and he is. I'd say he's probably the best putter in the world right now."

Love him or hate him (64% of you currently love him on our latest Instagram poll), there can be no denying DeChambeau's Sunday showing was one of the greatest in US Open history.

The stats back it up too, especially when you see this one posted by Justin Ray:

Most strokes gained total in final round by @usopengolf champion since 1960:

Yes, DeChambeau may have found the fewest amount of fairways ever for a US Open winner with 23 of 56, but he did gain an incredible 7.90 strokes on the field with his 67 on Sunday.

That marks the fourth-most strokes gained total in the final round of a US Open in the last 80 years.

Let that just sink in for a moment - Bryson shot a 67 when the average final round score was more than 74.

Then again, gaining strokes on a field is very much a stat that DeChambeau prides himself on, especially after what he said earlier this year:

From earlier this year: Love it or hate it, Bryson DeChambeau bet on himself — something we all do at some point. He was a world-class player, then changed his body and his game, risking an already-successful career. Gotta respect that. pic.twitter.com/2Kj750zq7U

"I personally think it's a game where you have to have an accumulative total," said DeChambeau. "It's strokes gained, you're just trying to add to it slowly over time.

"I think driving is where you can gain the most strokes if you're able to hit it straight. So for me, my thought process over the off-season was to focus on that aspect and that's why I wanted to do this.

"You're going to see me, hopefully, over the course of time, add up to where I'm beasting fields by a lot."

DeChambeau certainly stamped his authority on the field at Winged Foot on Sunday, and whether fellow golf journalists and golf fans out there like it or not, the best of Bryson is yet to come.