Bryson DeChambeau: "I want to drive the greens every week"

DeChambeau looks to overpower Winged Foot and win his maiden major title at the US Open... 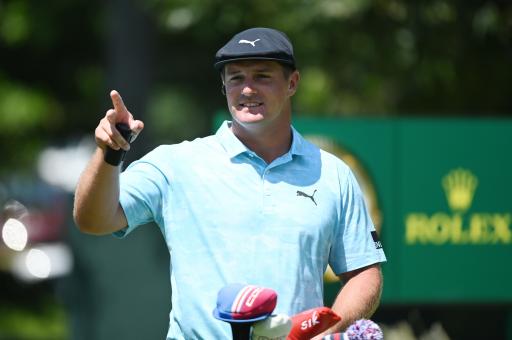 If you thought Bryson DeChambeau's distance gains were already impressive enough on the PGA Tour this year, the Mad Scientist admits he is only just getting started.

DeChambeau, speaking to the media ahead of this week's US Open at Winged Foot, claims he wants to be able to consistently hit drives over 400 yards and be able to find the greens on par-4 holes on a regular basis.

"I’m always trying to improve and I think I've figured a few things out," said DeChambeau, ranked ninth in the world rankings.

"My ultimate goal is to be able to drive the ball 400 yards in the air so I can drive the greens every week and have it be an unfair advantage.

"I’ve still got a ways to go, but if I’m hitting it as good as I am now with the driver, it’s going to be a tremendous asset."

WATCH: BRYSON RIPS DRIVE 423 YARDS DOWN THE 1ST AT MEMORIAL

While DeChambeau may have topped the PGA Tour driving distance charts for 2019/20 with an average of 322.1 yards (a 20-yard gain on his distance the previous year), he has sent multiple drives over the 400-yard mark especially in recent months.

The increase in power has been a result of the American packing on 40 pounds over the last 12 months, and the fact he now generates an incredible swing speed of 140 mph and ball speed bordering 200 mph.

Despite picking up seven consecutive top-eight finishes on the PGA Tour earlier this year, DeChambeau's form has waned since a tied fourth at the PGA Championship at the start of August with a missed cut at the Northern Trust, 50th at the BMW Championship and eventual 22nd place in the FedEx Cup.

But despite an indifferent run of results of late, DeChambeau very much fancies his chances of landing his maiden major title at the US Open this week, albeit at a testing Winged Foot where the winning score will likely be close to level par.

"I'm hitting it as far as I possibly can up there," said DeChambeau, who has played in five previous US Opens with a best result of tied 15th at Oakmont in 2016.

"Even if it's [drive] in the rough, I can still get it to the front edge or the middle of the greens with pitching wedges or 9-irons. That's the beauty of my length and that advantage.

"Now, obviously, if it's into the wind and there's some of those situations going on, it's going to be different. There's certain holes I might lay up on just because of the situation, but for the most part I'm going to be trying to go after it as much as I possibly can."

DeChambeau also admits he has been working on straightening things up following his week away from competitive action.

"I felt like I got some stuff taken care of [last week], but again, it's this never-ending journey of, man, I hit this one good and then I feel like I make the same motion and it doesn't do the same thing, and I'm like, hmm, why is that, FlightScope told me it was the exact same thing, so what's going on there.

"So we're working through some stuff to try and understand how to make it less sensitive when I'm swinging at these high speeds because obviously when you're swinging 15 miles an hour faster than what they test, than what anybody tests, it's going to affect how the ball performs a little differently. We're working on how to optimize what I'm doing."