The numbers behind Bryson DeChambeau's US Open victory

WATCH: We take a look at the numbers behind Bryson DeChambeau's epic US Open win at Winged Foot. 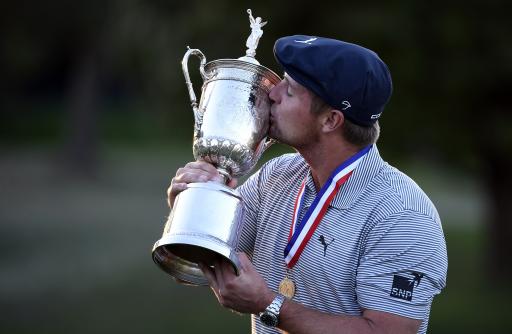 You may love him or hate him but there's no doubt that Bryson DeChambeau is changing the landscape of golf and after months of talking about whether his new size and speed would be successful, the 'Mad Scientist' has claimed his first major trophy after winning the US Open at Winged Foot.

In the video below, GolfMagic's Alex Lodge talks about the numbers and details behind DeChambeau's epic win.

Let’s throw a few facts your way about DeChambeau's win. DeChambeau was the first US Open Champion since 1937 to make an eagle in his final round – the last being Ralph Guldahl.

With DeChambeau finishing under par for the day and the tournament, he was the first to do this since 1955, with the champion there being Jack Fleck.

And finally, with the US Open, DeChambeau has now won the US Open, the US Amateur, and the NCAA Div 1 Invitational. The only other two players to do that? Jack Nicklaus and Tiger Woods.

So, what part of DeChambeau's game helped him win the US Open? One would immediately think it’s his distance, his overpowering length off the tee meaning he can dominate even the toughest of courses. Whilst this may be true, this has certainly overshadowed other facets of his game.

DeChambeau's putting was superb all week, ranking 18th in Strokes Gained Putting for the week. Around the greens as well, DeChambeau ranked 2nd , showing that he was the complete golfer for the week, with every part of his game on point.

Now for driving distance, this is where people may be a bit misunderstood. DeChambeau did not rank No.1 for driving distance for the week. In fact, he was 7th, behind players like Dustin Johnson and his final round playing partner Matthew Wolff. Sure, hitting drives 375 yards like he did on the 9th hole definitely helped in his win – but Johnson hit it 405 yards on Sunday, and he finished 11 shots off the lead.

DeChambeau only hit 23 out of 56 fairways for the week, coming in at 41% - the lowest percentile by any US Open winner, yet still ranking 26th for the week. For a US Open course that was said to have 10-inch rough that swallowed up numerous balls all week, it’s remarkable to see a player who wasn’t particularly accurate win the US Open in such dominating style.

This win has got a lot of people now debating whether distance needs to be addressed for future tournaments. In our opinion, this win doesn’t show that anything needs to be changed in the game of golf. This win shows the determination of a player, who at the start of 2020 discovered a way to improve his golf game. He stuck to it, worked relentlessly through a horrid year and it's paid off. It does however, cement the idea that the US Open is for players who hit it long and far, with accuracy no longer being regarded as an important aspect.

NEXT PAGE: Bryson DeChambeau CONFIRMS he will test 48-INCH driver to hit the ball further!

US Open
Paige Spiranac on Bryson DeChambeau: "It makes me sick, I might throw up"
PGA Tour
What drivers do the BIGGEST HITTERS on the PGA Tour have in their bags?
PGA Tour
Brooks Koepka to CADDIE for Phil Mickelson? Aaron Rodgers talks on THE MATCH
Golf news
Dustin Johnson joins Bryson DeChambeau as a PARTNER for LA GOLF
US Open
The US Open 2021: Groups and UK Tee Times for Round 1 and 2