Anna Nordqvist's win at Carnoustie on Sunday was her first win on the LPGA Tour since 2017. 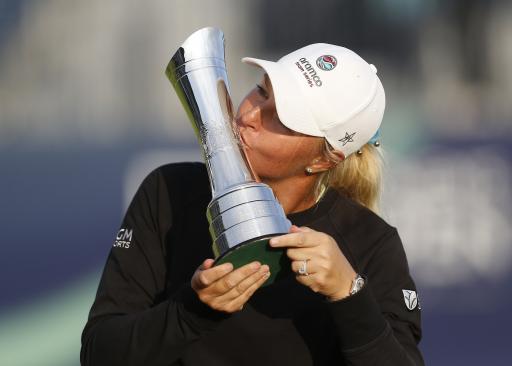 Anna Nordqvist claimed her third major title after a thrilling success at the AIG Women’s Open at Carnoustie.

The Swede closed with an excellent 3-under-par 69 for a 12-under-par total and a one-shot victory over a trio of players over the famous links.

Nordqvist was level with Denmark’s Nanna Koerstz Madsen on the closing hole and the 34-year-old’s solid par-4 was good enough to triumph as her playing partner slipped to a double-bogey.

England’s Georgia Hall, the 2018 Champion, Lizette Salas from the USA and another Swede, Madelene Sagstrom, all finished tied second on 11-under-par. Koerstz Madsen had to settle for a share of fifth place with Minjee Lee from Australia on 10-under-par.

What a moment for Anna Nordqvist! A true Champion in front of the greatest fans #AIGWO #WorldClass pic.twitter.com/jxRLMiYeCy

Nordqvist, a past winner of the R&A Girls’ and Women’s Amateur championships, ignited her final-day success with three birdies in four holes from the sixth before a key par-3 save at the testing 16th hole.

A host of challengers mounted their bid on a star-studded leaderboard during a dramatic final day at the Angus venue, most notably Hall who eagled both the 6th and 12th holes in her 67.

Salas, the runner-up in 2019, also had a chance on the 18th to reach 12-under-par but just missed. It was Nordqvist’s day, as she claimed the winner's cheque of $870,000 as part of the new largest prize fund in women’s major championship golf.

"I've been waiting for this win for a while," said Nordqvist.

"There have been a lot of downs and hard times so this makes it feel even sweeter. I could only dream of winning the AIG Women’s Open.

"I obviously played really solid in the beginning today. I hit a great hybrid in there on the sixth to two-putt for birdie. I managed to get the round going."