Are you allowed to replace your ball if an animal SNATCHES it?

Although this is an unlikely occurrence, what happens if an animal steals your ball on the golf course? 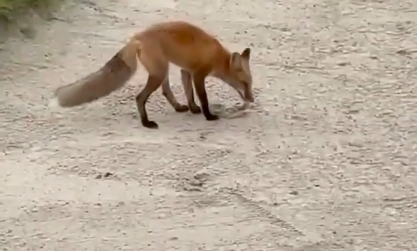 Over the years on the PGA Tour, we have seen animals interfere with play and make their presence known on the fairways and in the long grass.

We have seen crocodiles stalk golfers on the edge of lakes, luckily we haven't seen any casualties yet. We have also seen snakes lurk in the long grass at various different venues across America.

Seagulls have also proven to be menacing on the golf course. We have seen them pick up balls, move balls, drop them in water, the lot!

There is simply nothing you can do if an animal decides to try and ruin your golf game, you just have to stand back and let nature take its course.

A situation with an animal occurred in some footage posted by golfrules_questions. A fox had stolen a ball and taken it into a large bunker.

The fox puts the ball down and begins to bury it and this begs the question: Are you allowed to take your ball back and replace it on the short grass, or do you play it as it lies?

Luckily, the rules say it is the former. You certainly can replace your ball back to where the fox picked it up from. It would be extremely harsh for you to play it as it lies, as the fox could've taken the ball anywhere.

You may replace your ball back in the estimated spot where the animal took it. You may also use another ball if the original one is now irretrievable.

On this occasion, the rules of golf come to your rescue and it is a straightforward rule. However, it is important to know as many golf rules as possible so you can play every round without any nagging concerns.