Asia-Pacific amateur falls in water on way to quadruple-bogey

Jun Min Lee made a disastrous score on the second hole in the first round of the Asia-Pacific Amateur Championship at Dubai Creek. 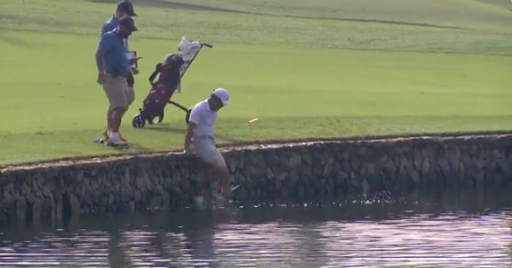 Jun Min Lee shot a 2-over-par 73 in round one of the Asia-Pacific Amateur Championship, but things could have been so much better if it wasn't for a calamity early on in his round.

Lee was trying to find the green with his third shot on the par-4 2nd hole after what he described as a 'poor drive' and a 'poor lay up'. He was confident that he could reach the green despite having an awkward lie on the edge of a lake.

"I was stuck on the rocks on the edge of the lake left of the fairway. From there, I was trying to find the front-right of the green or front-right fringe. I was like, ‘Man, I’ve got a stance. I’ve got this. I’ve got this," Lee explained of his struggles at Dubai Creek.

"So I’m over it. Getting ready. I hit the shot and the next thing I know I throw my club and I’m falling back. The ball is in the water, too. Overall a pretty eventful start.

RELATED: "WHY AM I NOT GOOD ENOUGH?": BUBBA WATSON LIFTS LID ON PGA TOUR PRESSURES

"So I get out. And the guys are like, ‘Hey, your wedge is still in there.’ I’m really wet at that point. But I’ve got to get back in there, grab my wedge and get back out."

South Korea's Jun Min Lee made a splash during Round 1 of #AAC2021 We caught up with him after his round to learn more pic.twitter.com/xkBqkherMA

So after he hit the shot, the 20-year-old returned to the water to get his wedge out. It was a truly incredible sequence of events that ultimately led to a quadruple-bogey 8.

Lee recovered with birdies at the 4th and 6th holes and he added four more birdies on the back nine. Unfortunately, he also made four bogeys to finish on 2-over-par.

The South Korean is currently sat in tied 53rd place and he will need a better second round if he is to make the cut which will be for the top 50 players.

RELATED: 'IT'S A DISMAL FAILURE': GOLF FANS REACT TO THE ONE-YEAR ANNIVERSARY OF THE WHS

"The rest of the day went pretty well. Although I did hit it in the water on 18. Other than that, it was a pretty decent round," Lee added.

"Bad shots just kind of happen. But you can’t base your whole day on the bad shots. Do that and you’re never going to be successful."