"I was amazed that it came out as a ‘big deal’ story because, well, partnerships change." 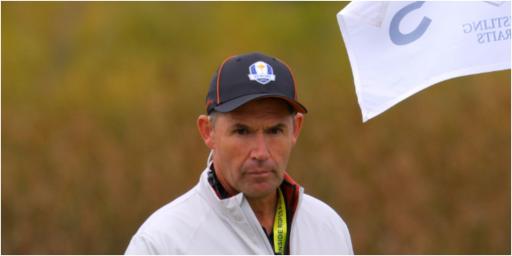 The Ryder Cup did not go particularly well for Padraig Harrington and Team Europe at Whistling Straits.

They were humbled and lost 19-9 against a merciless United States team who were urged by Tiger Woods to "step on their necks".

And while the immediate inquest into the defeat has seemingly finished, it is obviously still being talked about.

Padraig Harrington was a recent guest on the popular No Laying Up podcast where he talked about the Ryder Cup and how he saw it.

It appears that Harrington was a little bit annoyed with the journalist who first reported the "ball blunder" story that made the headlines.

Harrington, 50, was forced into a late change to two of his intended partnerships. He had originally planned for Lee Westwood to go out with Viktor Hovland and pair Paul Casey with Matthew Fitzpatrick.

But with 48 hours to go before the first morning session it was decided there were compatibility issues in the balls each pairing had planned to use.

It meant that Westwood partnered Fitzpatrick and Hovland played with Casey in the opening session that went 3-1 to the United States, setting the ominous tone as early as Friday lunchtime.

"One of the issues was a player came in and said he was uncomfortable with one of the balls on the greens," Harrington told the podcast.

"It was a bit ‘clicky’ for him. So we said, okay, are we going to force him into doing this?

"We had a look at it and we said, well, it’s incidental, we can change the partnerships up. We still had an experienced player with a rookie, which is what we wanted, so it was easy to switch up the partnerships.

He added: "The more I talk about it, the more it becomes a bigger story," he added. "I was amazed that it came out as a ‘big deal’ story because, well, partnerships change."

The journalist who broke the story was the Telegraph's golf correspondant James Corrigan.

Corrigan gave his thoughts last night when he posted on Twitter how they placed the story on the bottom of page seven with no more than 250 words, meaning they did not intend the story to be a "big deal" as Harrington claimed.

Listened to @padraig_h on @NoLayingUp and he said he was amazed that the writer who reported the 'ball issue' story made it out to be 'such a big deal... as is we were in turmoil'. Here is what I wrote. It was on the bottom of page 7 and was 250 words. It was hardly a splash FFS pic.twitter.com/dO2jYTNWWC

Pairings do change in Ryder Cups. Of course they do. And who would have forseen Rory McIlroy being benched for the first time since making his debut?

But suffice to say the ball issue "story" is a bit farcical, given the fact Harrington had a full stats team to help him with his pairings, not to mention the fact they had an extra year to get things right due to the pandemic.

It is, at least in our opinion, an extraordinary oversight.