Koepka's struggles continue as he slumps to missed cut at the Wyndham Championship... 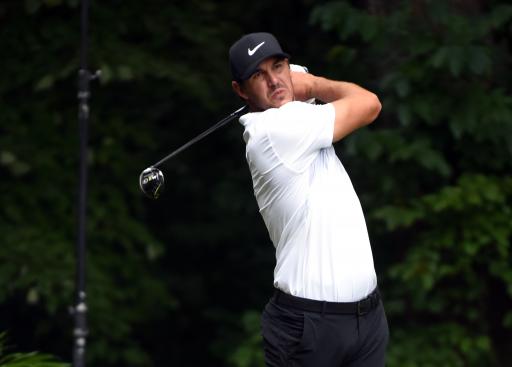 Brooks Koepka sent his drive into someone's back garden on the 10th hole en route to missing the halfway cut at the Wyndham Championship.

Pre-tournament favourite Koepka opened with a 2-over 72 and then followed it up with a level-par 70 to finish his week well outside the top 100 at Sedgefield Country Club.

Despite making an eagle at the par-5 5th and adding a birdie at the tricky par-3 7th to move up to level-par for the tournament, any hopes Koepka had of making the cut line were dashed when he sent his tee shot at the par-4 10th out of bounds into someone's back garden.

Koepka then hit three off the tee and went on to make a disastrous treble-bogey seven.

Koepka will need a solid week at the Northern Trust next week as he currently ranks outside the top 90 in the FedEx Cup standings, and only the top 70 players will progress to the BMW Championship.

The former World No.1 held every chance to win his third consecutive PGA Championship last week when starting the final round just two strokes behind Dustin Johnson, but he slumped to a dismal final-round 74 to finish 10 strokes behind eventual winner Collin Morikawa in a tie for 29th.

Koepka caused an element of controversy heading into that final round at TPC Harding Park when belittling his peers, in particular Johnson.

"A lot of the guys on the leaderboard, I don’t think have won, I guess DJ has only won one," said Koepka. "I don’t know a lot of the other guys up there."

RELATED: KOEPKA HAS NO INTENTIONS OF TALKING TO JOHNSON

Rory McIlroy admitted after the PGA Championship that he found Koepka's comments disrespectful to Johnson, especially given he has won "three times as many tournaments" on the PGA Tour than Koepka.

Koepka has not won a tournament in more than 12 months and has just one top-five finish in 13 events on Tour in 2020.

Despite having four majors to his name, Koepka has seven PGA Tour wins in total.

NEXT PAGE: TIGER WOODS CONFIRMS HE WILL PLAY IN THE NORTHERN TRUST