In this video, Alex from GolfMagic takes on PGA Tour star Bryson DeChambeau's swing speed at the Swing Suite. 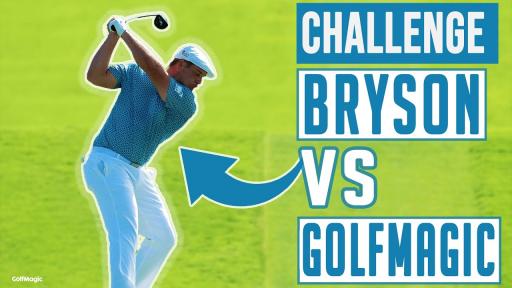 Bryson DeChambeau divides opinion, but there's no denying that what he's done with his body is extremely impressive. In terms of swing and ball speed, he's a dominant force on the PGA Tour and he's not done yet. But how hard is it to accomplish a swing speed like Bryson DeChambeau's?

In our latest YouTube video, our equipment guru Alex attempts to match Bryson DeChambeau's average swing speed on the PGA Tour this season of 133mph.

WATCH GOLFMAGIC TAKE ON THE DECHAMBEAU SPEED CHALLENGE BELOW:

Okay so Alex couldn't quite get there, even with the use of Swing Sticks which are used by thousands of golfers all over the world.

Alex's maximum swing speed during the challenge was 125.7mph, which is still extremely impressive, although I can't say the same about the shot result.

It goes to show just how hard it is to hit a golf ball straight when you're swinging so hard at it and although DeChambeau doesn't hit as many fairways as a few other PGA Tour players, he still hits the ball pretty straight, even with that jawdropping speed.

Alex was shattered after attempting this challenge and it's part of what makes DeChambeau's transformation so impressive, as he puts in a serious amount of work in order to reach his level of speed.

DeChambeau has been working closely with World Long Drive champion Kyle Berkshire and he even revealed that he has come very close to passing out during his speed training sessions.

The reigning US Open champion aims to reach an average ball speed on the PGA Tour of between 205 to 210mph, so expect his swing speed average to increase in the near future too.