Can you perfect the impossible "FLY IT IN THE SOLO CUP" challenge?

The maker of Cartbarnguys has come up with an incredibly difficult challenge for you, but is it as hard as first thought? 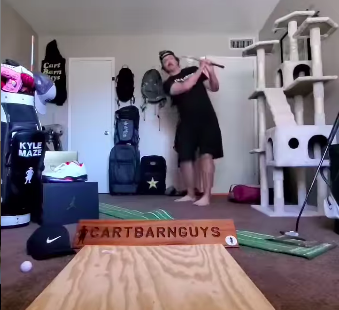 Kyle Maze is the man at the heart of the Cartbarnguys and he has come up with a tough new challenge for his viewers to take on at home.

Maze, born in California, began working at Papago Golf Course in Arizona and he has worked in five different cart barns. His Instagram and YouTube platforms have become very popular as he documents the struggles of trying to make it at the highest level.

Maze has made rising, satisfying ball flights his trademark and I, for one, will never get bored of watching his videos.

It is always great to see the ball flights of the best players on the PGA Tour and the ball tracing feature has proven to be very popular in recent years.

But now, Maze has a challenge for his viewers and it is one that will take a lot of dedication and hard work to perfect.

Maze has named it the "Fly It In The Solo Cup" challenge and the rules are very simple. You just need a small glass or cup to put down and some light and hollow golf balls.

A ping pong ball will also do. All you need to do is land the ball in the cup. As simple and as straightforward as the rules sound, it is nowhere near as easy as you could think it is.

As you can see, Maze is a very talented golfer but even he struggled to land the ball in the cup without it bouncing and without the cup falling over.

Eventually, it took him over 55 days, nearly two months, but Maze finally completed what he described as one of the toughest challenges he has ever taken on.

Can you complete the Fly It In The Solo Cup challenge?

NEXT PAGE: TYRRELL HATTON SHOUTS F-BOMB IN FINAL ROUND OF CJ CUP ON PGA TOUR

kyle maze
cartbarnguys
PGA tour
ball tracer
fly it in solo
Previous
Golf rules: This player hit a BIRD with his tee shot, but what happens next?!
Next
Olympic Gold Medallist Xander Schauffele excited to return to ZOZO Championship