Seonghyeon Kim was the victim of a harsh lip out on the 72nd hole at The Summit Club, but his ball eventually fell in the cup. 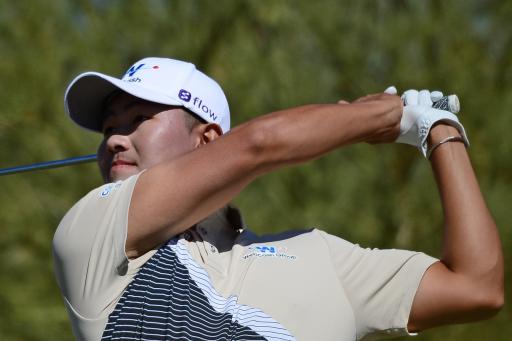 Seonghyeon Kim played in just his second PGA Tour event at the CJ Cup last week and he impressively finished on 16-under-par in a tie for 32nd place.

However, things could have been slightly better for the South Korean as he had a short putt on the 72nd hole to move to 17-under-par.

His ball hit the left edge of the cup and performed a full horseshoe around the hole. It was incredible to see how the ball didn't drop in and Kim was bewildered himself.

The 23-year-old waited for the ball to drop and as he was about to tap the ball in, it fell. He thought he had made a birdie to reach 17-under-par for the tournament.

Collin Morikawa on course to be World No.1 with big lead at Hero World Challenge
Bryson DeChambeau gives SHORT, SHARP response on playing with Brooks Koepka

A putt that will leave your head spinning ... especially if you wait until the end. pic.twitter.com/PQeoIgfJPv

But this was not the end of the incident. The PGA Tour ruled that the ball had hung over the lip for longer than a considerable amount of time for Kim to reach the hole, plus an extra 10 seconds.

As he had already signed his card for a birdie on the par-5 18th, he was given a one-shot penalty which turned his score into a par. He carded a 69 instead of a 68.

It was a disappointing judgement from Kim's point of view but in all honesty, the player waited well over the allotted time allowed for a ball to drop in the hole.

It was still a very promising week for Kim who qualified for the event by winning the 2021 Japan PGA Championship.

His only other PGA Tour appearance came at the CJ Cup of 2020. He finished in a tie for 52nd at The Summit Club on that occasion.