Tyrrell Hatton has a well-known fiery temper and he once again documented this on the PGA Tour on Sunday. 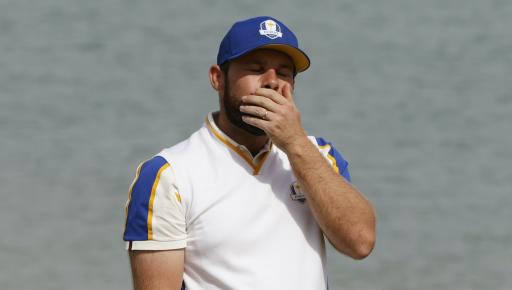 It is fair to say that the Englishman plays on the edge and it can only take a bad approach shot or a missed putt to take him to the boiling point.

Hatton, who won the Arnold Palmer Invitational in 2020, finished in a tie for 18th place on 18-under-par at the CJ Cup in what was an extremely low-scoring week in Las Vegas.

The Sky Sports broadcast joined Hatton on the 9th hole at The Summit Club. He hit his approach to the green which landed and spun back to roughly 15 feet from the hole.

You can always rely on @TyrrellHatton to tell it how it is #thecjcup #PGATour pic.twitter.com/yloSQYkqMD

It looked like a solid shot and a realistic chance for birdie, but the 30-year-old was not satisfied with this result at all. After a couple of seconds, you can hear him shout "F*** Off."

This has been a reaction synonymous with Hatton. We have seen him show this sort of behaviour before, as well as snapping and throwing his clubs across the golf course.

As we know, golf is an extremely frustrating and difficult sport and it gets the better of everyone. We can call safely say we have had angry episodes on the course.

Sometimes it is important to vent your frustration and Hatton clearly agrees with this ethos. He is a passionate player and he showed this at the Ryder Cup too.

The six-time European Tour winner has made a solid start to the 2021/2022 PGA Tour season and he will be hoping to build on his win tally that began at Bayhill.

NEXT PAGE: PGA TOUR: HOW MUCH DID EACH PLAYER WIN AT THE CJ CUP?