Chris DiMarco calls Patrick Reed a "dick" and that he "cheated" 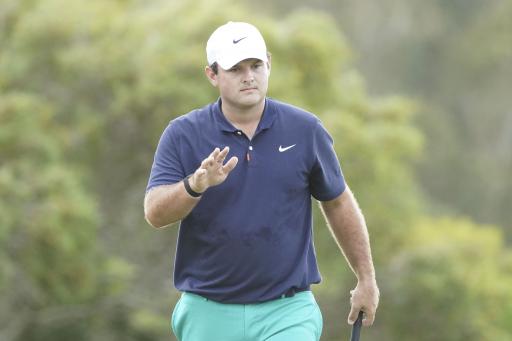 Former PGA Tour pro Chris DiMarco, the man who memorably lost out to Tiger Woods in a playoff at the 2005 Masters, has fired multiple shots at Patrick Reed on Twitter.

DiMarco, 51, went on his explosive rant after a golf fan shouted "cheater" as Reed narrowly missed his crucial birdie putt in a playoff at the Tournament of Champions in Hawaii last weekend.

Three-time PGA Tour winner DiMarco has since deleted his tweets, but we have a screengrab of them anyway...

DiMarco wrote: "Is there a bigger dick in the world. Own your stuff. Always excuses. Just say you cheated and you got beat!"

He was referring to the incident from the Hero World Challenge in December, where Reed caused outrage in the golfing world when receiving a two-stroke penalty for improving his lie in a waste bunker.

Following a close up camera angle behind the shot in question, many people in the golf industry consider Reed had intentionally swept away sand twice in order to give himself a better lie.

Reed was questioned by the media after the round, and while taking the two-stroke penalty on the chin, made it clear he had no intention of improving his lie or that he had in any way cheated the rules of golf.

Despite his comments, fellow PGA Tour pros and golf analysts have gone as far to say that Reed "cheated".

Even Justin Thomas, who denied Reed in a playoff at the Tournament of Champions two weeks ago, was seen taking the mick out of Reed in the bunker during practice ahead of the Presidents Cup - WATCH HERE.

Golf fans have even given Reed plenty of stick just about everywhere he has played golf since, none more so than at the Presidents Cup where the American was on the receiving end of plenty of criticism from Australian fans.

NEXT PAGE: REED PRAISED FOR USING RULES TO ADVANTAGE