Justin Thomas burns Patrick Reed during his practice round at Royal Melbourne... 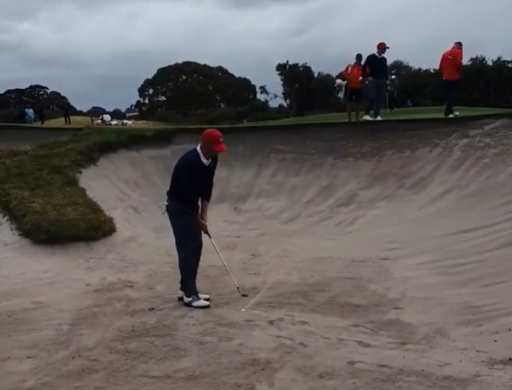 Justin Thomas quite literally took a dig at Patrick Reed during his practice round at the Presidents Cup on Tuesday.

It came just four days after Reed's controversial two-stroke penalty for improving his lie in a waste bunker when twice brushing sand with his practice swings on the 11th hole of his third round at the Hero World Challenge.

Despite most people feeling like Reed swept sand away on purpose to improve his lie, the former Masters champion claimed the camera angle made it much worse.

"It's unfortunate because even though they weren't, I wish [the cameras] were actually directly on the side of me, because it was in a pretty good footprint but the footprint was a full footprint," said Reed.

Marc Leishman and Cameron Smith, two Australian players competing for Ernie Els' International side this week, have both told the media how they expect their home fans to "taunt" Reed for much of the week. Smith even went as far to say Reed had "cheated".

Reed has since addressed Smith's allegation, and said: "It goes from wanting to beat those guys to it now turning personal, so it's going to be a fun week."

If JT's reaction in the bunker is anything to go by, it could be a long week for Reed.

United States playing captain Tiger Woods has attempted to diffuse the situation by claiming he has spoken to Reed and the team are getting on with things ahead of their bid to win an eighth consecutive Presidents Cup.

According to Woods, he spoke to Reed about the situation and it was "short and brief, and to the point."

International captain Els also wants everyone to move on from the controversy.

United States have won 10 of the 12 Presidents Cup matches going back to the biennial tournament's inauguration in 1994.

The Internationals have only won once, at this week's venue Royal Melbourne, with a commanding 20.5-11.5 victory in 1998.

The teams tied in South Africa in 2003 when the playoff match between Woods and Els could not be decided before darkness.