Could you juggle a golf ball in a crowd on 16th hole at the WM Phoenix Open?

Popular social media golfer Ryan Rustand took on a golf ball juggle challenge like no other at the WM Phoenix Open, but could you complete it too? 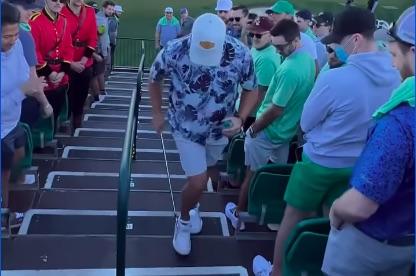 The 16th hole at TPC Scottsdale is manic, we all know this and certainly, after the weekend at the WM Phoenix Open, no one needs another reminder.

The crowd provided an electric and hostile atmosphere for each and every player throughout the week after Covid-19 restrictions prevented this at the 2021 event.

We saw Sam Ryder and Carlos Ortiz score amazing hole-in-ones, the 10th and 11th aces since the tournament moved to the Arizona venue in 1987.

However, some of the magic was going on in the crowd too and it was provided by popular social media golfer and sports personality Ryan Rustand.

He took on a challenge that not many people would be able to complete. He was one of the lucky patrons at TPC Scottsdale who was in one of the grandstands of the par-3 16th hole.

Rustand began from the front and bottom of the grandstand and with a wedge, he attempted to juggle a golf ball all the way to the top of the steps.

It looked as though it was late in the day on one of the championship days of the event, as the opposite side of the hole looked fairly empty and quiet.

In an atmosphere not quite as raucous as a Sunday afternoon, Rustand began his challenge and passed it in flying colours.

As you can see in the footage above, he remains cool, calm and collected as he ascends the stand. Literally taking the challenge step by step, he reaches the top and celebrates.

We have seen many golf trick shots and juggling videos over the years and this could be one of the best we have ever seen.

NEXT PAGE: WHAT CAN WE LEARN FROM JORDAN SPIETH'S NEW PRE-SHOT ROUTINE ON THE PGA TOUR?