Phil Mickelson commented on a video that saw a young child dangerously drive a buggy towards people during the WM Phoenix Open. 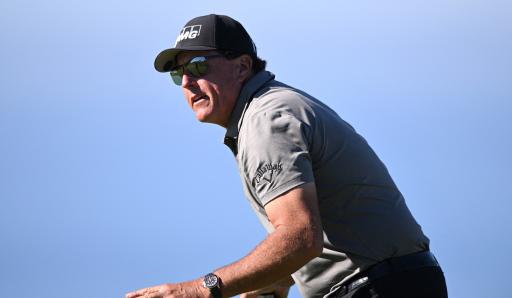 Phil Mickelson said "nothing has changed" at the WM Phoenix Open since his last appearance after seeing a video of a child dangerously driving a golf buggy at a venue.

Mickelson didn't play at the tournament this year and he hasn't played since he missed the cut at TPC Scottsdale in 2019.

RELATED: PHIL MICKELSON GOES ON TWITTER BLOCKING SPREE | HAVE YOU MADE THE CUT?!

After seeing the footage of the child almost causing harm to other spectators, Mickelson suggested that this sort of incident commonly happens at the WM Phoenix Open.

Much like the rest of us, the six-time major champion was relieved that no one was hurt and the footage raised serious questions as to why the child was able to drive the golf buggy without anyone stopping him from entering the vehicle.

The 51-year-old has won the tournament on three occasions and he has the joint-lowest scoring record of 28-under-par which he achieved in 2013.

Fortunately no one was hurt or clubs broken. https://t.co/Qch75RCQKH

In 2020, Mickelson skipped the tournament for the first time in 27 years to instead play in the Saudi International which he also played in this season.

Despite not playing in Arizona, Mickelson was indirectly involved in one of the biggest storylines that emerged from the week that also involved Charley Hoffman.

After a contentious ruling in the second round at TPC Scottsdale last week, Hoffman aimed his anger towards the PGA Tour and the USGA in an Instagram post.

Hoffman said he wouldn't be surprised if players deferred to other leagues such as Saudi Arabia as players lack protection and transparency.

Mickelson commented on the post saying: "I feel ya." This would suggest that the 45-time PGA Tour winner agrees with Hoffman's criticisms of the tour.

Recently, Mickelson vented his frustrations at the PGA Tour for concealing the "billions" worth of footage and media that they own which aren't accessible for the players.