Counterfeiters BUSTED with 20,000 golf equipment in China after dawn raids

PXG, Callaway, Titleist, PING and TaylorMade were among the trademark labels used. 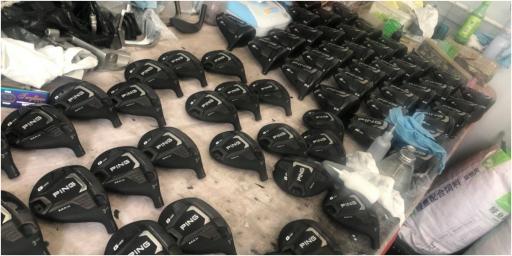 More than 20,000 items of counterfeit golf equipment have been seized in raids and seven people have been arrested.

They worked with more than 100 members of the Shanghai Police to conduct the series of six raids in warehouses in cities Dongguan, Guangzhou, Longui, Shanghai and Shaoyang.

In total, they report that more than 21,281 pieces of counterfeit clubs, components and apparel as well as 51,904 fake trademark labels bearing the names of Titleist, Scotty Cameron, TaylorMade, PXG, Callaway and PING were seized.

"As golf continues to grow in popularity, counterfeiters are taking drastic measures to deceive the public and threaten the integrity of the game," said Daryl Rocco, senior paralegal for Callaway.

"The enforcement efforts driven by the Golf Group are growing steadily, and we’re thrilled authorities in China are sending the message that producing and selling fake golf equipment is unacceptable."

During the raids in early September, seven people were arrested.

Since 2004, more than two million counterfeit products have been seized by law enforcement, the press release states.

In addition, more than 1,500 websites have been shut down.

Formed in 2004, The Golf Group has supported the efforts of international law enforcement and government agencies to conduct raids and investigations of counterfeit operations, as well as raise public awareness of the issue.

RELATED: HOW TO SLOP SLICING YOUR DRIVER