She may be the best player in the world at the moment but she made a surprise admission earlier this week. 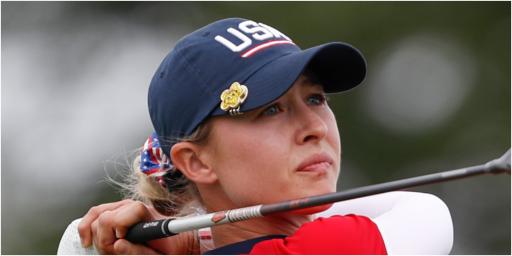 Nelly Korda is currently the best player in the world thanks to becoming an Olympic champion and winning her first ever major.

The 23-year-old is known for an incredible swing that never changes tempo and it is one of the key reasons for why she is so consistent on the LPGA Tour.

Korda is not one to usually be involved in a lot of media off the course but she most recently spoke to the FAIRGAME podcast with Adam Scott.

She spoke about the first time she ever went to the Titleist Performance Institute to get properly fitted after she switched over to the TSi1 driver.

RELATED: GOLF FANS REACT TO INCREDIBLE SHOT FROM A PUDDLE

Korda told the podcast: "I actually went to TPI for the first time in my entire life this year. End of January.

"And I was using the old epic driver, like a five-year old driver, I couldn't get fit for a driver at all.

"Then I went to TPI, and they fit me into their driver, which by the way, is an amateur driver. And they were like, 'this is the first time a pro has ever won with this driver'".

Korda has confirmed she has been invited to take part at the PNC Championship in December with her father Petr.

Korda also told the podcast how much she dislikes spending time on the range.

She said: "I hate spending time on the range. I absolutely can't stand it. I can spend maybe 45 minutes to an hour, but recently in the past year and a half, I've definitely been spending more time on my swing, especially recently."

No pressure with 88 4D cameras watching you
Really cool to have @Cisco capture 4D swings for the @uswomensopen and you’ll see them again for @usopengolf! pic.twitter.com/ItF95Uef21

NEXT PAGE: BRYSON JOKES THEY'LL HAVE TO TAILOR MASTERS JACKET