Did you know this rule about your ball being embedded in the face of a bunker?

At the weekend, European Tour player Ben Evans experienced something very similar to this situation, so what are the ins and outs of the rule? 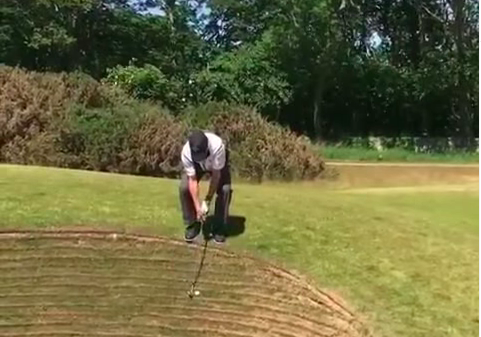 Bunkers are one of the hardest features to negotiate on the golf course because your ball can finish in any lie and you can be faced with very difficult shots.

However, when your ball becomes embedded in the turf face of a bunker, you need to know what rules you can use to your advantage before you take your shot.

If you find yourself in a similar position to the man in the video below, it is almost impossible to hit your ball out of the bunker, despite the golfer actually playing the shot quite well.

According to the rules of golf, the stacked turf face of a bunker is not considered to be in the bunker, therefore the ball is lying in the general area.

Although the ball in the video does not look to be embedded in the turf, if your ball is embedded and stuck in the turf, the player would be entitled to free relief.

However, a committee may adopt the local rule F-2 to restrict free relief for an embedded ball to 'areas cut to fairway height or less' and to 'not provide free relief to a ball embedded in the wall or lip around a bunker, such as a stacked turf or soil face.'

We saw this happen on the European Tour over the weekend at the Cazoo Classic when Ben Evans thinned his second shot from a fairway bunker into the face of the trap.

The ball was completely embedded and so he received a free drop in the rough just above the bunker, but he unfortunately went on to make a bogey.

It is important to be informed on as many rules as possible because you never know what scenario the game will throw at you next.