Former US President Donald Trump makes the quip while he's introduced onto a tee box at his golf course in Florida. 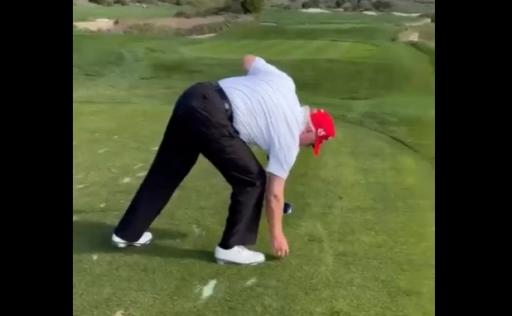 Donald Trump has been caught saying he is the "45th and 47th President of the United States" in a viral video captured on Trump National golf course in Florida.

Trump, the former US President succeeded by current US President Joe Biden, dropped the joke in his customary 'Make America Great Again' red hat while being introduced onto one of the tee boxes by an unidentified man on the video.

The video has now gone viral on social media across multiple news outlets.

Trump declares himself the '47th' president while playing golf. pic.twitter.com/fKVlI1mwFk

"We'll be lucky if we're up," Trump replies.

The unidentified man says: "First on the tee, the 45th President of the United States."

Trump, 75, then stops him in his tracks as he says "45th and 47th," which is then met by claps and cheers from those around him.

He steps up to his ball and drills it down the middle to the cries of "beautiful" by the videographer.

RELATED: WHERE DO TRUMP AND BIDEN RANK IN THE HISTORY OF GOLF-MAD US PRESIDENTS

Biden, 79, is the 46th President of the United States.

After Trump's quip on the tee box, it would appear he will be stepping up his plans to become the 47th President of the United States in 2024.

Without going into too much politics, we will leave it at that and see what happens from here.

But there we have it, Trump thinks he will be the 47th President of the United States.

NEXT PAGE: BRYSON DRIVES THE GREEN AT PAR-4 AT FARMERS INSURANCE OPEN