In the latest instalment of 'Jason Dufner Hat Watch'... 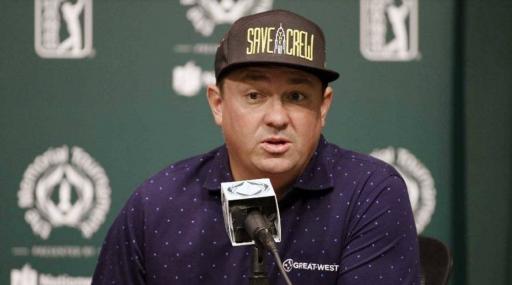 In the latest instalment of ‘Jason Dufner Hat Watch’, we can bring the news that the Dufman has signed a one-week deal for Memorial. Yep, one week.

MSF Real Estate Capital, based in Ohio where Dufner comes from, has linked up with the PGA Tour star after they realised he was out of contract.

"We realised right around the time of the 'Boss' hat that he didn't have a sponsor, so I did a little research and next thing you know I reached out to his agent and here we are," Woodson said.

"We designed seven total, and he has all seven," he said. "We're just letting him roll with whatever his outfits are and what he feels comfortable with."

So, what designs are in the line-up? There are two “Duf Daddy” hats in the range, while all have the MSF logo on the side.

This week, Dufner sported a “Save the Crew” hat - referring to the local MLS team that may be relocated to Texas.

"I wouldn't say I'm extremely passionate about soccer, but I can identify with what they're going through, being from Cleveland, losing the Browns, I think that was in the early '90s," he said.

He also wore a red-and-blue "Ohio Country Club" lid and a green cap featuring a mesh back, with "Golf Capital: Columbus Ohio”.

As you would expect the response has been rabid from golf fans.

"I had no idea it would be hundreds of emails, thousands of texts, complications with printing and everything," he said. "But it's gone so well the last couple of days and everyone at our company is so excited and invigorated by it, I really would do it again."

If you want to pick on up - and you better be fast as they will sell out - head to the website. They’re $40 with 25% going to Dufner’s foundation.