English Golf Club prevented from reopening on Monday due to VANDALISM 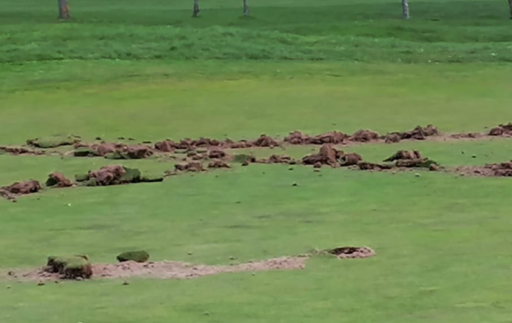 A golf club in England was been prevented from reopening its course to the public on Monday after vandals wrecked havoc on six of its greens on Sunday evening and in the early hours of Monday morning.

As a result of the damage, Sprowston Manor Hotel and Country Club in Norwich was forced to remain closed for all of Monday, despite the sport returning for the rest of the country.

#Sprowston Manor Hotel and Country Club in #Norfolk has been unable to reopen its golf course today after vandals damaged five of the greens overnight. #HeartNews

A Norfolk Police spokesman said the damage was caused between 11pm on Sunday and 6am on Monday.

It is believed suspects, according to police, entered the site and ripped up the turf on six of the venue's greens.

The greenkeeping team at Sprowston Manor Hotel and Country Club carried out urgent repair work on Monday afternoon in a bid to get the course back open for golfers on Tuesday.

"Due to overnight vandalism which is being investigated by Norwich Police to five of the greens we are sadly unable to reopen today," read a post on the club's Facebook page.

It has since been confirmed the club is now reopen for golfers, albeit with noticeable signs of damage on six of its holes.

Anyone with information is being encouraged by the police and the club to 101 quoting crime reference 36/20104/21.

Golfers flocked to courses up and down the country yesterday following an ease in restrictions that permitted the sport's return along with a number of other outdoor activities.

REVEALED: THE AVERAGE SCORE FOR ENGLISH GOLFERS IN THEIR FIRST ROUND BACK ON MONDAY! ARE YOU ABOVE OR BELOW THE NATIONAL AVERAGE?!