Matilda Castren holed the decisive putt at the Inverness Club in Ohio to ensure that Europe retained the Solheim Cup. 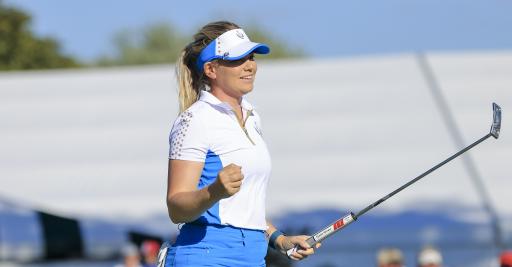 Europe have won the Solheim Cup on a dramatic day at the Inverness Club, securing a tense and dramatic 15-13 win over America.

Catriona Matthew's European side entered the Monday singles 9-7 up and both they and the United States won six points apiece on the final day to secure a two-point victory.

With only their second win on American soil in the history of the event, Matthew has become the first-ever European captain to win the Solheim Cup twice.

"It's just unbelievable, I really can't believe it. My team have been just so fantastic all week and it's really up to them. I don't do a whole lot, they just go out there and they win the points for us," said Matthew.

"I'm so proud of them, we knew it was going to be tough this year with just a handful of European fans and they just dug in deep. Especially yesterday when the crowds were getting pretty loud, they hung in there and came out with a great finish yesterday.

"They looked great to start with (in the singles), but then it got a little dodgy. But it was a great fight back and I'm so proud and happy for them."

Leona Maguire had an amazing rookie appearance at her first Solheim Cup, winning 4 and a half points, and she got the first blue points on the board with a resounding 5&4 win over Jennifer Kupcho.

Celine Boutier also got another point on the board for Team Europe by beating Mina Harigae by the same score, while Madelene Sagstrom beat America's Ally Ewing 3&2 as well.

After the top match of Anna Nordqvist and Lexi Thompson was halved, as was Nanna Koerstz Madsen's game with Austin Ernst, Europe had reached the 13-point mark and were only one away from retaining the trophy.

USA then began to mount a comeback as World No. 1 Nelly Korda, Megan Khang and Brittany Altomare all secured points to bring the scores back to 13-11.

However, with ice running through her veins, Matilda Castren rolled in a crucial par putt on the 18th hole to secure a 1up win against Lizette Salas to retain the Solheim Cup.

In consolation Yealimi Noh and Jessica Korda respectively won points against Mel Reid and Charley Hull, while Emily Pedersen birdied the final hole to secure a 1up win over Danielle Kang and to complete the 15-13 victory.

NEXT PAGE: THE BEST GOLF POLO SHIRTS THAT G/FORE HAVE TO OFFER THIS SUMMER!