Solheim Cup: Was Nelly Korda controversy the WORST ruling ever?

It has never been without contentious decisions, but where does this latest one rank? 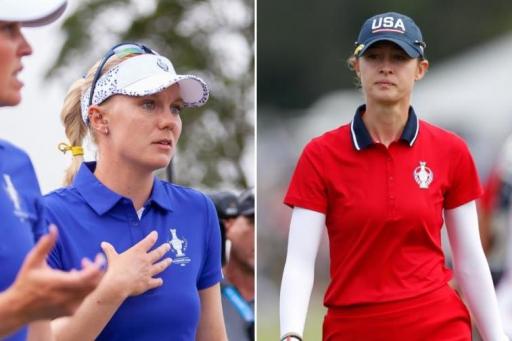 It wouldn't be the Solheim Cup without a bit of controversy.

Tensions appeared to boil over during the fourballs session of day one in Nelly Korda and Ally Ewing's match against Nanna Koerstz Madsen and Madelene Sagstrom.

World No. 1 Korda's eagle putt was tantalisingly close to dropping at the par-5 13th at Inverness Club in Toledo, Ohio.

It ran past the edge of the hole and, depending on what side of the Atlantic you were born, was close to dropping in.

Europe's Madelene Sagstrom conceded the putt and picked it up before chucking the ball back to Korda.

But the Europeans were penalised as Sagstrom failed to wait 10 seconds to allow the putt a chance to drop in.

Korda's birdie was changed to an eagle and they won the hole, and saw out the match to take the point.

Korda and her partner Ally Ewing later said they did not call in the rules official.

Once an official is called in, players cannot change the decision.

This was after fans on social media suggested Korda should have declined the ruling and halved the hole as a sporting gesture.

The LPGA Tour said in a statement: “The chief referee, match referee, observer and TV observer all deemed that Nelly Korda’s third shot on No. 13 was overhanging the hole and was picked up by her opponent before the waiting time had ended. Therefore, her third stroke was treated as holed.”

Rules official Missy Jones said Sagstrom was in violation of rule 13.3b.

Teary-eyed, Sagstrom said: "Obviously I wasn't following the rules about leaving the ball for 10 seconds, but I do believe in integrity and honour of the game of golf, and I would never pick up a putt that had a chance to go in.

"I personally don't agree with the decision with the ball being on the edge, but I didn't follow the 10-second rule, so it sucks right now because I feel like I let my team down."

The US tied the Europeans 2-2 in the fourball session, taking the day’s total to 5 ½ to 2 ½ in favor of the visitors.

The Europeans hold a two-point lead going into this afternoon's singles.

Where this controversy ranks is up for debate.

It's not the first and certainly won't be the last - but what about some of the previous?

It pulled her and her partner Janice Moodie level in the match against Kelly Roberts and current Team USA captain Pat Hurst.

Or so it would seem.

Her opponents pointed out that her putt was longer than Sorenstam's chip and ordered the shot re-taken.

She did not chip in again, and they would lose the match.

The Americans later said they were following the rules while the Europeans claimed it was unsporting.

The Europeans won that year.

The 2015 Solheim Cup was won by the United States but it was soured in what was described and is now referred to as "gimme gate".

Europe's Suzann Pettersen did not grant her opponent Alison Lee a short putt during a fourball match.

Lee missed a putt to win the 17th, but picked up the short putt but did not realise Petterson and her partner Charley Hull were already headed for the next tee.

The United States came from a 10-6 deficit to win.

Where does Korda's "controversy" rank in the history of the Solheim Cup?