This heart-warming and hilarious story shows just why we love this game so much. 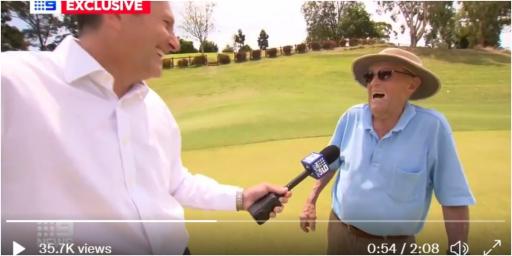 If you were playing golf with someone who is nearly 100 years old and you heard a scream you may fear the worst.

But in the case of 99-year-old Hugh Brown the screams were of delight and astonishment after he made a hole-in-one.

Aussie Brown is just two months away from hitting the big milestone and he plays his golf at the Indooroopilly Golf Club.

He was standing on the tee of the par-3 fifth hole measuring at 145-meters when he got out his driver.

Thinking he couldn't reach the green he smashed the big stick but the ball trickled onto the green to the annoyance of the group in front.

#WATCH: The stunning hole-in-one pulled off by a 99-year-old, making him the toast of his local golf club. @Jonathan_Uptin #9News pic.twitter.com/DRmlgEv0vU

And then the ball gently rolled towards the hole and in, more than 60 years after he last claimed to last have an ace.

The story was first exclusively reported by 9News Queensland where one of the players told the story before Brown gave his thoughts.

"He shouldn't have hit," Jonathan Uptin told the programme who was in the group in front.

When asked what he thought when the ball went in, Uptin said: "F*** me!"

Brown thought the screams were because the group were annoyed because he hit the ball when he shouldn't have done.

The 99-year-old bought everyone a beer afterwards.

And he returned to try and reinact the shot, but didn't need his wallet because he carded a triple bogey after losing a ball off the tee.

RELATED: WHAT GOLF GEAR REVEALS ABOUT YOUR PERSONALITY

NEXT PAGE: DECHAMBEAU SAYS TIGER WOODS "IS MY DAD"

hole in one
Australia
queensland
PGA tour
Adam Scott
Previous
Which TaylorMade iron is right for you? TaylorMade P700 Series Iron Showcase
Next
Sky Sports broadcaster says we will see ANOTHER player dominate like Tiger Woods