Harry Styles following in the footsteps of pal Niall Horan by spending his downtime on the golf course. 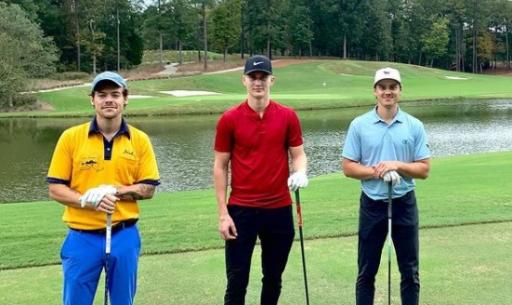 Pop music sensation Harry Styles has been spotted teeing it up on the golf course with members of the Carolina Hurricanes ice hockey team.

Styles, 27, nipped out for a round of golf at Old Chatham GC in North Carolina with ice hockey stars Martin Necas, 22, and Sebastian Aho, 24.

While the former One Direction singer did not post directly to his Instagram when out on the course, Necas wasted little time and his post soon went viral.

Probably to be expected when you consider Styles has just shy of 40 million Instagram followers.

Styles reportedly plays off a single-figure handicap, similarly to his good friend and former 1D bandmate Niall Horan, who owns his own golf management company.

Horan's Modest Golf Management looks after a number of the world's best players on the PGA Tour and European Tour, including Tyrrell Hatton, Christian Bezuidenhout and Guido Migliozzi.

"He is so famous," Necas said of Styles during an interview with NHL.com.

"I didn't know what to expect, he's just a normal guy.

"He was humble, making jokes and it surprised me. He's one of the best singers in the world and is also incredibly nice."

Styles' round of golf in North Carolina comes just days after the English singer admitted his song Watermelon Sugar was partially about the "female orgasm."

He is currently in the middle of his Love On Tour shows.

Styles is next performing at Madison Square Garden in New York on Saturday.

NEXT PAGE: CADDIE PROTECTS HIS JUNIOR GOLFER IN THE WORST POSSIBLE CONDITIONS - WHAT A GUY!