Fake Tiger Woods shows up at TPC Boston, and the fans can't get enough of him. 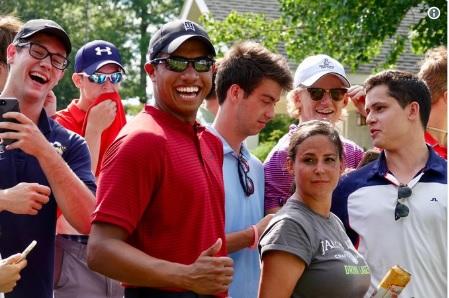 Fake Tiger Woods upstaged real Tiger Woods in the final round of the Dell Technologies Championship.

With real Woods going on to shoot a lacklustre final-round 71 to finish outside the top 20, his lookalike in the crowd was helping put on the bigger smiles for Tiger fans attending TPC Boston on Labor Day Monday.

Sporting Tiger's typical Sunday attire of red shirt, black pants, black hat, and even sunglasses, fake Woods posed for snaps and even caught the attention of the golf broadcaster. But despite dressing to impress out there, real Woods appeared the only one not impressed with the fake version - denying a handshake as he walked past him in the crowd. Check out some of the pictures below...

And here's that snub in photos...