The funniest golf tantrum ever? "Wanna smash me up do ya? I'm 61 years old!"

Footage has emerged of an angry exchange between two players during the club championships at Cranbourne Golf Club in Australia. 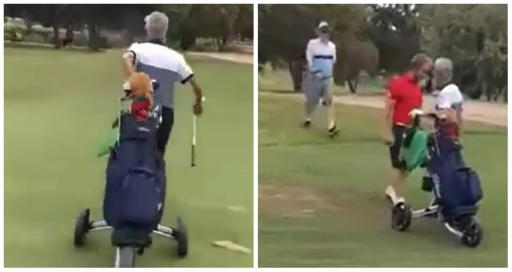 We'll give you fair warning here, this video contains a lot of explicit language.

That being said, let's dive right in. This is probably one of the funniest outbursts of anger we have seen in quite some time.

This clip was doing the rounds earlier in the week and now we have a bit more information.

Per a report by the Australian GolfDigest, we now know where this INCREDIBLE temper tantrum took place.

It happened at Cranbourne Golf Club during their club championships.

What is disappointing is that we don't have too much information on what led up to this moment.

It started with this chap walking across the fairway - pull cart behind him - gesticulating towards the man in red.

The pair then square up before what looks like the club captain intervenes.

The man in red accuses the older player of "hitting up on him". As the player in red walks away, the other gentleman says:

Meanwhile in #Victoria … with the news of @DanielAndrewsMP getting re-elected, tempers are boiling over at the Cranbourne Club Championships. Part 2 in thread. pic.twitter.com/RU21scMmrK

What's incredible is that there is a part two to this story. We simply cannot commit to writing what was said.

It makes it all the more sensational that this self-proclaimed 61-year-old appears to have hit a dreadful shot in between parts one and two.

I mean, he was a bit upset. Maybe he should have eaten a banana? Get some potassium in to calm down?

Can we just pause for a second and appreciate the fact that his playing partner seems completely calm with all of this going on.

He's just...standing in the fairway as the other player appears to launch one of his irons into the woods as he confirms he's putting in an official complaint.

Well it appears that club championships at Cranbourne Golf Club are serious, serious business and not for the faint of heart.

And we thought that Tyrrell Hatton was an angry golfer...

Next page: The best club throws in golf history!