These ANGRY club throws on the PGA Tour are unforgettable...

We have compiled a list of the best club throws and angry moments to happen on the PGA Tour and some of them are absolutely incredible. 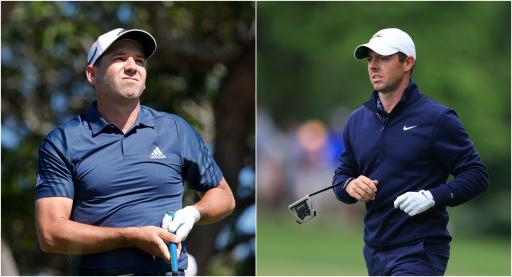 Over the years on the PGA Tour, we have seen players lose their rag, snap clubs and shout expletives on the golf course.

One of the most satisfying ways to relieve yourself of tension is the classic club throw and many of our favourite PGA Tour players have done this in the past.

We saw Matt Jones throw his club into the water during the Arnold Palmer Invitational last week but he is not the only one to have done this.

Rory McIlroy also snapped a club at Bay Hill last week as the tough conditions took their toll. It is not just us mere mortals at local golf clubs who suffer from anger on the golf course.

Take a look below at the best club tosses we have ever seen on the PGA Tour.

John Daly at the PGA Championship

John Daly was playing at the PGA Championship in 2015 at Whistling Straits and he had a particularly tough time on the par-3 7th hole.

After putting three shots into the water, the two-time major champion couldn't hold back his anger and threw his club into Lake Michigan along with his balls.

Rory McIlroy was competing at the Cadillac Championship in 2015, the same year of Daly's headloss. In the second round, the Northern Irishman had a 222-yard approach shot into the par-5 8th green at Doral.

Intending to hit a high fade, McIlroy hooked his ball into the water. He then sent his club hurtling into the depths as well.

Sergio Garcia has always had a fiery temper. He has previously thrashed around in bunkers and even took his shoe off and kicked it during his rookie PGA Tour season.

At the Thailand Golf Championship in 2011, Garcia found the water with his tee shot on the par-3 8th hole and after he hit his provisional, he sent his club absolutely flying down the hole.

Henrik Stenson has broken a club or two in the past on the PGA Tour, but in 2011 at the Dubai Desert Classic, he controlled his anger in a very casual way.

After hitting a poor chip, Stenson flipped the club over his head and it soared into the lake. He didn't even think twice or look to see where it landed.

A masterpiece in anger from Matt Jones

We couldn't leave out the latest addition to the illustrious club toss archives. On the 12th hole at Bay Hill, Jones kissed goodbye to his putter.

The Australian, a winner of two PGA Tour events, was forced to use his sand wedge for the rest of the third round. It is fair to say he must've regretted this instant moment of madness.

Matt Jones threw his putter in the lake at 12!!

Next Page: Strop Alert! Six of the best clubs naps of all time in pro golf!