Tyrrell Hatton hit a drive he didn't like off the 11th tee in the second round of the DP World Tour Championship, prompting him to drop the F-bomb... 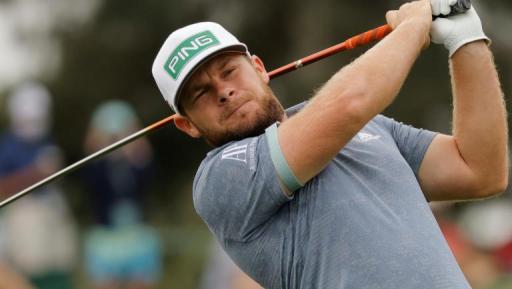 If you are a golf fan, one thing you will know about Tyrrell Hatton is he's been one of the standout European players of the last five years on the PGA Tour and the DP World Tour.

However, what you'll also know is Hatton is partial to a rant and an explicit outburst on the golf course. The Englishman's latest offence occurred during the second round of the DP World Tour Championship.

He finished the round with a 67, matching US Open champion Matt Fitzpatrick stride for stride at the top of the leaderboard in Dubai. But Hatton hit a small blip at the start of the back nine.

WATCH: Tyrrell Hatton with yet another brilliant STROP at the DP World Tour Championship!

The 31-year-old pulled his tee shot left on the 11th hole into the waste area. He wasn't pleased with his shot and simply said, "F*** you," which was picked up by the television cameras.

This outburst was short and simple compared to other ones he has done in the past. Maybe he's forgotten the 'thumbs-up' technique that he learned at an anger management class (if you know, you know).

Tyrrell Hatton, the gift that keeps on giving.. pic.twitter.com/JJKL8GSnfl

His poor drive led to his second bogey of the round and he followed this up with another on hole 12 on the Earth Course. Hatton battled back with birdies on 14 and 17 to draw level with Fitzpatrick at the end of the day on 12-under.

If Hatton wins his seventh DP World Tour title this week, it won't be enough to finish at the top of the rankings come the end of Sunday. Fitzpatrick, however, could win the season-long points list with victory.

He could even win the finale by coming second, but only if Rory McIlroy fails to finish in the top seven and Ryan Fox fails to win the event. So far so good for the US Open champion and two-time DP World Tour Championship winner.

"I would say it has been consistently very, very average," Hatton said of his season in 2022 after the second round at Jumeirah Golf Estates.

"So I haven’t had many chances to win. My last win was Abu Dhabi at the start of last year. I once had four wins in 15 months, and winning is hard.

"So you can’t take those periods for granted. I’m a bit sad that I haven’t had the chance to win since then. All I can do is keep plugging away and hope for the best."