One meme even turns Gareth Bale into Brooks Koepka after he storms off in a strop at Euro 2020... 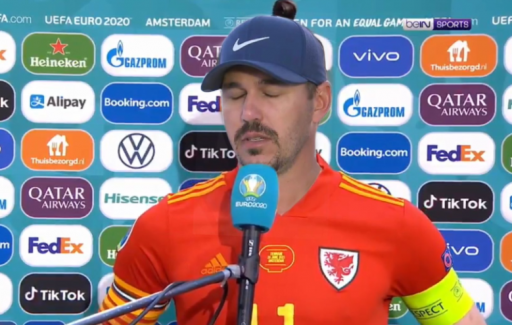 The classic Gareth Bale 'golf memes' were back out in force on social media today as Wales were sent crashing out of Euro 2020 in their Round of 16 match against Denmark.

Bale, the Wales forward and captain, could do little to prevent his side from being dumped out of the tournament as Denmark ran out comfortable 4-0 victors in Amsterdam.

With the 31-year-old's loan spell at Tottenham Hotspur now up, there has been much speculation as to what Bale's future exactly holds after Euro 2020. That has been fuelled further since Bale declared his decision will cause "chaos" in the industry.

When asked about his upcoming decision about his career after the Wales match on Saturday, Bale just stormed off. WATCH BELOW:

“Is that your last game for Wales?”

A number of people in the industry believe Bale could very well soon hang up his boots in favour of spikes due to his passion for golf. Some are even saying he will try to take up the game professionally.

While nothing has yet been confirmed, one thing is very certain and that is Bale will have plenty of time for golf this summer.

Check out some of the best golf memes doing the rounds today:

Gareth Bale on his way to the golf course at full time https://t.co/oCYxxmLbMY