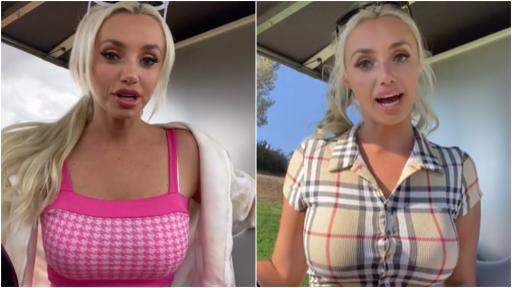 Cassie Holland, the TikTok golf cart sensation, has revealed yet another shocking story from the fairways, this time involving a man trying to spike a girl's drink on the golf course.

Holland, who has 1.2 million followers on the social media platform, retold a story of how one of her customers attempted to get her to slip alcohol in his date’s drink without her consent. She had only asked for a coffee.

It did not sit well with Cassie, as she explains in her viral TikTok video post below:

"So I'm on my cart and I pull up to a guy and a girl and I ask if they want anything," says Cassie.

"The guy wants a rum and coke and the girl just wants a coffee. I'm like would you like cream and sugar, or I have Irish whiskey.

"She says 'oh no alcohol for me, just cream and sugar'. So I start making their drinks and she goes to get her clubs out of the cart to go and hit.

"Whilst she's doing that, the guy says 'you can go ahead and put some Bailey's in the coffee... if you don't know what Bailey's is it's an alcholic creamer. I'm like 'well I have to hear it from her because I don't think she wants any'.

"So I'm like 'hey girl, do you want Bailey's in this?' Once again she says 'no I don't want any alcohol'.

"So I look at him and say 'sorry she said no'. I keep making the drinks.

"She then goes over the fairway to hit her ball and he comes up to me and says 'I know she said she didn't want any, but she actually really does so just go ahead and put some Bailey's in there.

"So at this point it's getting pretty weird so I try to make a joke like 'why do you want to get her drunk, is she beating you at golf?'

"He says 'oh no, we've been hanging out for a while now and she's not really coming around, I keep taking her to all these golf courses and I'm trying to get her to like me. I think she just needs a little push, help me out, put the shot in she won't even care'.

"I think she's going to know if there is alcohol in it, so now he's trying to get me in trouble.

"She then comes back over and goes 'what's going on?' I'm like 'he's trying to get you drunk'.

"He's then like 'yeah she wouldn't help me out so she must not want a very good tip'.

"He laughs and puts his card down and goes to hit his ball. He goes over there and she tells me that they haven't really known each other that long but she'll be fine golfing with him.

"I'm like well he's being pretty persistent, here's my number and text me if you need anything.

"She's like 'thanks so much for checking', and by the time I saw them finish I saw her getting into the car without him, so I think everything was fine.

"Don't be that guy. Believe me, a girl is much more likely to like you if you don't do that.