Golf fans FURIOUS with final round coverage in the United States

Golf fans in America were left bitterly disappointed with the lack of coverage available during the final round of the Workday Charity Open. 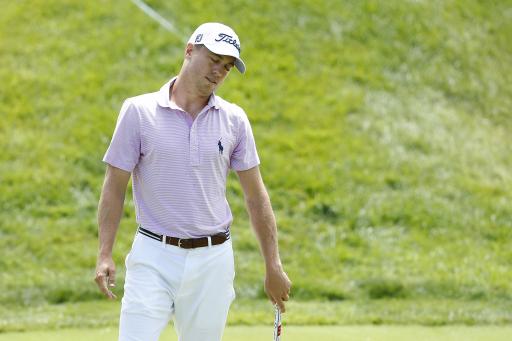 In what was the best end to a tournament since the PGA Tour restarted in June, golf fans in the United States were left disappointed when live coverage of the Workday Charity Open final round was nowhere to be seen on television.

Coverage of the final round at Muirfield Village was being shown live on Golf Channel from 9am until 11am (ET) and during that time, Thomas' lead had slipped, causing a three-way battle with Collin Morikawa and Viktor Hovland both in the mix.

With the players only through the first seven holes, Golf Channel's coverage ended and fans were told to switch over to CBS, which would take over on tape delay at 3pm.

If fans in the USA wanted to see the final round live they had to watch it on cbssports.com for online streaming or pgatour.com to watch the featured groups coverage, which didn't include the group of Morikawa, Thomas and Hovland.

This infuriated those trying to watch from across the pond, causing thousands of fans to take to Twitter to display their frustration.

Golf Channel/NBC Sports Executive Producer Molly Solomon felt the need to tweet and explain why Golf Channel couldn't show the rest of the tournament, following an onslaught of tweets directed at both Golf Channel and CBS.

"Feel compelled to explain TV rights to all those rabid golf fans," she wrote. "Golf Channel has rights to the weekend lead-in coverage which is comprised of 2 hours before network coverage begins.

“Golf Channel was live from 9-11 AM and CBS is currently streaming live coverage on multiple sites. They will have tape-delayed coverage at 3 PM. Golf Channel doesn’t have rights to current window. Hence, Golf Central keeping you updated.”

Television rights aside, golf fans were furious given that the Workday Charity Open was the only live action on in the States and they couldn't understand how the two broadcast giants couldn't have come up with a better solution.

Check out some of the social reaction below:

Absolute Amateur hour from CBS and Golf Channel right now. You guys have this big opportunity to attract people to golf with it being one of the few sports being played and you can’t even find a way to get the final round on TV? Joke @GolfChannel @CBSSports

I understand that the main CBS channel can’t air it but what about the backups? CBS Sports Network is airing PBR Bull Riding, Golf Channel is airing Golf Central Pregame

Golf on @CBS is brutal right now. Watch three tee shots then immediately go to commercial. Three approach shots then another commercial. Can we just watch golf for a few minutes in a row?

Someone explain to me why I cant watch the championship round of golf live today. It is the only sport being played in the US today. CBS is playing the final round on Replay later today.

EVERYONE: hey can y'all just show more golf shots, maybe put the golf on somewhere we can actually watch it

The most PGA Tour thing ever is one of the best showdowns in recent memory not being shown live on TV. Only the folks going out of their way to stream it are watching.

CBS played absolute fuck all while this amazing event was unfolding. Why play The Suzann Petterson Story while an actual live golf tournament is playing it’s FINAL ROUND?! What?! Play that piece after!

you could see this smoke coming from a mile away with this leaderboard.Really sad for golf, that should have been the most watched & then talked about thing for the next 72 hours.With nothing else on, they had a landmark showdown of epic proportions.u must Do better @PGATOUR

The best part is these silent 2 minute commercials where you don’t know if the stream shit itself or what’s happening. The suspense! pic.twitter.com/4dEL4k4Nrv

NEXT PAGE: Harry Kane watches the PGA Tour in his underwear after victory against Arsenal