We have seen England's Bukayo Saka turn his hand to golf during Euro 2020 and now it is the turn of Dries Mertens. 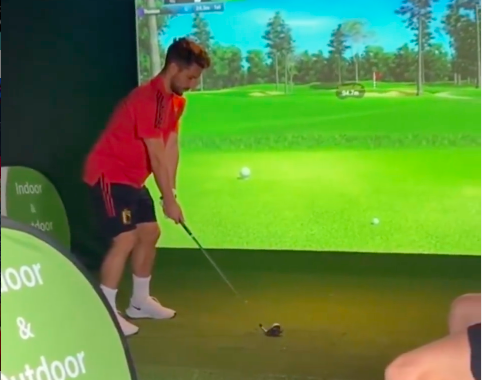 Since then, the young winger made a vital contribution to England's stunning 2-0 win over Germany in the last 16 of the tournament to set up a mouthwatering tie with Ukraine in the quarter-finals.

Was it his session on the golf simulator that inspired him? Who knows? But Dries Mertens has also picked up his clubs and tried his arm at golf on a simulator of his own.

The 34-year-old is an extremely experienced winger for Belgium and Napoli in the Italian Serie A division, but much like Saka, it seems the winger should stick to his football career.

Belgium are one of the world's best footballing nations right now and like England, they have reached the quarter-finals of the Euros, but they face a much stiffer task in reaching the semi-finals.

They will face Italy who swept their group with nine points without conceding a goal. They needed extra time to beat Austria in the last 16, but they still remain one of the favourites to win the tournament.

"Bit of a late reaction ain't it?" one fan said.

"He started laughing after 3 seconds lol," one fan commented.

"One things about eden, he's gon laugh," another fan said.

"Why was his reaction so delayed," another fan commented.

"No need to laugh, there's plenty of hazards in golf," one fan said.